It is a sad moment to realize that the time has come to remember our own Donald Pomfrey, who died August 16, only a year and two days after losing good friend Ron Balogh, former president of Harvey’s Alumni Association. Together the two men were the heart of the Riv-Har Duck Race and had worked together on the fundraiser for many years.

It is almost fitting that we couldn’t hold the race this year because I don’t know how we could have done it without those two loyal alumni members.

Well, right now I imagine a meeting is taking place at the Hellriegel’s in the sky. The first question at that meeting is probably about who’s buying, but the second would be “When is our first heavenly Duck Race?” 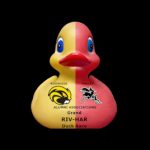 One of the things I am most proud of from my time on the RHS Alumni Association Board was being asked to head up Riverside’s participation in the Duck Race after Don had to give up those duties. To follow Don in that role was some big hip waders to fill. But with the help of a lot of folks in the association, we got it done and carried on the great tradition those two had helped create.

One of my first remembrances of Don was watching him in the first alumni basketball game at the brand new Riverside Fieldhouse. After my doing some math, he would have been around 65 at the time. But there he was, outhustling and outshooting a lot of the younger Beavers. And they weren’t just going easy on the much older man. He was giving them a lesson.

Later I became a regular in the upper row of the fieldhouse, watching the RHS basketball games with the “Statler and Waldorf” of Riverside, Don and his great pal Ray Whitely. The two men were so much like those “balcony guys” in Sesame Street. They knew more than anyone else in the stands. And for me the knowledge and insight I gained from them was invaluable.

Don always played hard on the court, worked hard and tirelessly for the alumni group and supported Riverside in so many other ways. And the next time you hear some thunder, it just may be Don and other departed Beavers banging bodies in the best pick-up game Heaven has ever seen.