Introduction and Afterword by Gretchen Reed

Gretchen: Imagine four children ages, 12 – 4, who had spent their entire lives as residents of Las Vegas, now living in Northeast Ohio. On April 21 they awakened to a “fairyland” snow of about 5 inches. The evening had been wind- free, and the snow had built up on tree branches and caused many fallen limbs and drooping shrubs in the area. Throughout March these children had enjoyed an unusually warm, sunny month at the home of their grandmother, Marietta Lipps, in Concord Township.

Her son Tom and his wife Sarah and their four kids had been in the process of trying to move from Nevada, where Tom was a well-known musician, to Florida, where he had signed a contract with Disney World. Their move was delayed because of Covid, so the six of them had moved in with Marietta before Thanksgiving of ’20 until now. For the four young Nevada dwellers, Ohio opened their eyes to a world of wonder that Marietta describes as follows:

These “desert kids” have lived amid rocks and concrete all their lives. Climate in Nevada remains pretty much the same all year: an average of 330 days of sunshine, temperatures that can reach 117 degrees, and air conditioning as a way of life. The average rainfall is 4” per year.

I have enjoyed watching their reactions to the weather experiences we native Ohioans have enjoyed or complained about for years. The first week the family was here, we had a power outage for a day and a half. (Thank you, whole-house generator!) The children were frightened by the strong wind – another new experience for them.

Mid-November introduced them to colorful leaves that, when they fell, the kids raked and jumped into the piles and dumped bags of them over the hill. (I did not have to hire anyone to clear the yard this year).

We were all in the dining room when heavy rain began. As it hit the window and formed droplets cascading down, Emmaline, 4, shouted in excitement and called for her mother to come and watch as she entertained herself by following the droplets down the window. Our windows were open during a recent rain.  Evan, 10, and Annalise, 7, commented on how good the air smelled. 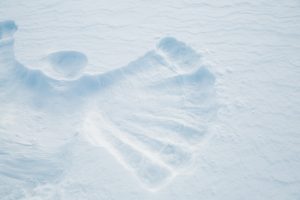 Home schooling was off the schedule the first day we had heavy snow. The kids played outside all day and were creative, making snowballs, forts and snowmen – er, snowpersons. They previously had visited during the Christmas season, but those years had been relatively mild.

I took the kids to Lake Erie Bluffs a week ago, and Annalise exclaimed, “Look at all the confetti,” when she saw the blossoms dropping from trees. We walked the trails and climbed the tower. Their wading in the lake was followed by snow two days later.

Another adventure took them down the hill behind my house to the creek and over the bridge that Tom, their grandfather, had built. They explored trails and followed deer tracks, which led to a salt lick in the neighbor’s yard. They swear they saw bear prints, too.

When I asked Noah, 12, what he liked about Ohio weather, he said, “It’s nice to hear something other than it’s partly sunny or partly cloudy. And you have a forest in your back yard!” Many states, including Nevada, have scant or no weather reporting since nothing changes. 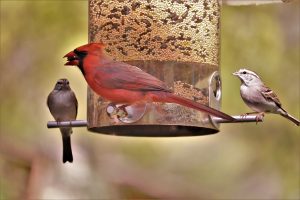 I have bird feeders in the front yard and “herds” of squirrels that freeload. The kids especially like the woodpeckers, cardinals, robins and blue jays. All they saw in Vegas were reptiles and coyotes, so birds and deer are new to them. They listen to the birds, and their father tells them what key they are tweeting in – music to their ears, I guess.

Today the kids witnessed six Canada geese waddling through the yard. Of course, they all had to check them out closely and then came back with a “poop” report about the driveway.

Most of all, the kids are fascinated with the natural greenery, something they could previously see only at a distance in the mountains. While riding by an elementary school, Noah noticed the grass surrounding the building. In Vegas, the playgrounds are concrete with tiny square patches of grass used for PE classes. 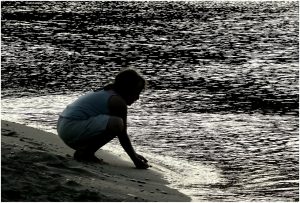 I took them to Fairport Harbor Beach one day. They couldn’t get over how much fun it was to walk barefoot in the sand and wade in water. Then they went looking for rocks, shells, beach glass, etc. Noah thought he found an old coin from a sunken ship. It was a struggle getting them to leave because their sandcastle wasn’t finished yet.

The other day I took Emmaline with me to drop off something at my brother Dennis’ house. Daffodils were blooming in his front yard, so Emmaline picked some to happily present to her mother. My yard is now blooming with tulips, which are not to be found in the kids’ old neighborhood.

These four grandchildren have experienced a lot through all the senses, including taste (Hint: Grandma’s lasagna, Compadres’ tacos, East Coast custard), but those sensory sensations belong in another category.

Gretchen: Marietta and I have been faithful friends to each other for over 50 years as we both taught at RHS. From her description above, it should be apparent that she has been an incredibly devoted mother and grandmother to her family, which also includes daughter Marianne (husband Chris) and their son Kian, and younger daughter Krista, (husband Dennis and son Sebastian, born in May).

When she told me a few details about how these children have responded to Ohio, it seemed as if there was a story waiting to be written. Why don’t more of us native Northeastern Ohio residents react to our beautiful state “with childlike eyes”?

Someday I hope that all of Marietta’s four “desert” grandchildren will remember and appreciate the new world that their grandma had opened for them. No wonder Las Vegas residents have created colorful neon signs; earth tones can be downright boring. Probably only Noah and Evan are old enough to understand that they will soon live in yet another state full of wondrous things far different from Ohio’s and Nevada’s.

Their father’s musical career is taking the family to the Orlando area. He had worked with Cirque du Soleil in Vegas; and his entire family did a tour starting in Japan, then to Russia, then through Eastern Europe. After performing in Spain and Paris, they returned to Vegas.

Few children have the opportunity to immerse themselves in both the wondrous world of nature in Ohio and the imaginative Disney environment the Lipps kids will soon experience.