In 1944 a resolution was passed by the Painesville Township Local Board of Education to build a new combined high school and junior high school. Previous to this time, students in this area had attended high schools in neighboring sections.Because of World War II and the accompanying building shortages, the actual construction was postponed until 1948. 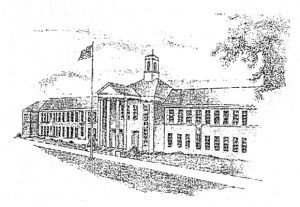 The fall session of September, 1949, opened with seventh, eighth, and ninth graders in attendance.

In the following school year the enrollment increased to include the tenth and eleventh grades. All six grades were represented for the first time in the 1951-1952 school term with the first graduating class being that of June, 1952.

At the present time there are approximately 1800 students enrolled in the Riverside School District.

A few years ago there were only half that many. By next year, there will be over 2000 students in our schools.

The present enrollment at Riverside is approximately 700 – the second largest in the Lake County School System.

NOTE: This history was copied from the program handed out at the school open house on Sunday, November 4, 1951. The Lake County School System at that time consisted of Madison, Perry, Painesville Township, and Kirtland.

One Thought to “Quick History of Riverside”