Teachers of junior high and high school students are likely to be familiar with the resistant mindsets their students may bring to the subjects being taught. Such attitudes are less prevalent in elective classes, such as music, art or photography, but teachers of REQUIRED classes tend to find out quickly that some of their kids expect to DESPISE certain subjects.

If I may make a personal digression here, I understood the resistant mindset well based on my own reaction to being a ninth grader in algebra class years ago in Mentor High School. Actually, I was paranoid about it and still consider my brain a huge black hole about anything numerical, so in confronting algebra, I knew I was about to be miserable and ignorant in that class for the full 180 days. However, I was truly fortunate to be in Joseph Kostecka’s class; he was patient and kind and somehow saw to it that I passed (barely).

After becoming certified as an English teacher, I expected many kids to have a negative mindset about some units in the curriculum, such as grammar and punctuation. (I was correct; they did). It takes a Herculean effort to convince tenth graders that learning proper use of the comma is vital to their survival and well-being. However, in defense of my own position, I swear that in my 75 years, I have never used algebra directly, whereas I have probably used millions of commas.

For the most part, my tenth graders were receptive to reading when it came to short stories and novels, but I was rather taken aback at their “blech” response to poetry, especially by most of the boys. The girls tended to be more receptive (gender stereotype in full force here). The days following the introduction of a poetry unit, a typical conversation between a burly football player (FP) and me would be:

FP: Are we doing pomes today?

FP: Mumble, mumble (something it was best I couldn’t hear).

After a few of these experiences, I grew desperate to find something to break down the resistance because, after all, sometimes we end up teaching things for no better reason than they’re in the official school curriculum. Had I a choice, I would have probably exempted every athlete from the poetry units (another stereotype here). But then I was lucky to have a colleague and friend, Cindy Rathburn Metzger, who saved me because of being far more creative than I’d ever be.

One day I saw one of her students with a “poetry notebook,” an assignment Cindy had made. It was a simple concept: The student picked ten poems by any published author, typed or printed each poem on a page, wrote a paragraph explaining the meaning of the poem, and illustrated it in some way. Cindy said it was fine if I “stole” her idea; we did not have the same tenth graders in class anyway.

So I made the assignment, fully prepared for the poems chosen to be the shortest ever published (they were) and also prepared for the paragraphs of explanation to be short and less than profound (correct again). It was a pleasant surprise to discover some creative illustrations, and many of the notebooks were quite imaginative and pretty. Plus, nary a student missed the due date or failed to turn one in. Almost every teacher and student knows the concept of a “guaranteed good grade,” and this was fully in effect with this assignment. I never made an assignment that netted more “A” grades than this one, and the notebook had to be either incomplete or totally slipshod to earn a “B.” In other words, it was a huge success for all of us.

If you’re wondering where I’m going with this narration, it involves Linda Sabol’s notebook; I use her name because I have only good things to say about her. I put several of the notebooks into my book bag and headed down to our work room to have a look. Linda’s collection was neatly done and very attractive in all ways, but one of her illustrations absolutely arrested my attention.

One of her chosen poems was “Flower in a Crannied Wall” by Alfred Tennyson. He was a writer during the Romantic Age; he wrote of encountering a lone flower growing from a crack in a stone wall and contemplates the wonder of survival, the meaning of beauty and the unfathomable majesty of God’s world. But Linda’s interpretation wasn’t the issue; her illustration was.

She had cut out a magazine picture of a ghetto scene in Washington, DC; the foreground showed a burned-out jalopy, piles of trash, and several children playing in the midst of everything. Clearly showing in the background was the U.S. Capitol building, the irony being abject poverty existing almost directly in front of a symbol of great power and wealth. It takes a real leap of faith to see a connection between the picture and Tennyson’s poem, but Linda accomplished that leap. 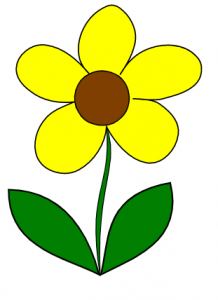 She had obviously used great patience by cutting tiny pieces of thick felt and assembling a green stem and leaves with a bright yellow blossom atop, complete with a tiny brown center. Then she had glued it onto the picture, which also had in the foreground the remains of a dilapidated picket fence. She placed the flower, maybe visualizing a sunflower or daisy, perfectly between two of the fence’s slats. Back to Tennyson’s poem, he had described a stone wall, not a fence; and I doubted that most tenth-graders would know the meaning of “crannied,” but since poets are excused for using creative license, I excused Linda for stretching images.

Whatever she meant it to be, it struck me as the most extreme, hysterically funny anomaly ever, rather like a bottle of Chanel #5 hanging around a skunk’s neck. I was only grateful that no one was in the room with me, as there I was, by myself, laughing as if I’d been raised in “Bonkersburg.” I could hardly wait for someone to come in to share my glee, and the first “someone” happened to be our biology teacher, Ben Ulis. I was laughing too hard to speak, so I just pointed to Linda’s pages. NO reaction, except for how he looked sideways at me as if to say, “What is WRONG with you?”

Ben seemed to be too scientifically oriented to relate to anomalies, so I went searching for someone who would understand and found Carol Gregg Benroth, fellow English teacher and longtime friend. She laughed, and it was a great relief to see that she got it, except that “it” was not because of Linda’s creation; Carol was laughing at my laughing.I told her I could hardly wait to give the notebook back to Linda, with its “A” grade, so that I could tell her she had made my day. Carol said, “We

ll, Gretch, I don’t think Linda had any intention of being funny.”

Carol was right. The next day, I gave Linda her notebook opened to “Flower” and said I’d never had anyone amuse me quite like she had. With a quizzical look, she asked, “What ARE you talking about?” It was time for me to consider that my sense of humor might be offbeat, bizarre, left of center – whatever. I’ve since been told that several times by several people.

This classroom experience happened during the 1970s, when environmental concerns had become a huge issue in our country, so Linda’s choice of illustrations fit the times. (Sadly, Tennyson’s philosophy is now obscure). Decades have passed since Linda Sabol planted a posey in a slum, but I would love to think she might read about herself here and understand the impression she made on one English teacher.