How often does a high school have three generations of one family, all remaining as loyal alumni, graduate from its halls? Robert (Bob) and Jacqueline (Jacquie) Wolf, who celebrated 64 years of marriage on August 2, have two sons, a daughter-in-law, and two grandchildren whose successful careers and dedication to RHS make them stellar alumni as they follow in the values their mother and father have held dear.

Although Bob graduated from North High School in Columbus, his loyalty and service to the Riverside community have paralleled his wife’s, especially because he pursued a vocation in art education and has always shared his talents with others. From the time he and Jacquie married in 1958, he became a devoted supporter of Riverside schools as he attended events centered around his two sons and two grandchildren.

Jacquie, graduating in the RHS Class of 1954, has been an active presence in the school district since she and her new family settled first in Painesville Township and later in Concord. Years in between found both Wolfs working as educators in Mentor. Jacquie, after graduating from Kent State, taught second grade for five years at Headlands and two years at Hopkins elementary schools until leaving to raise two sons.

When her boys were little, she was a volunteer at Buckeye Elementary for five years and served one year as the library clerk. Later, she spent 17 years in the Fairport Public Library, serving mostly as a children’s librarian.

She was a member and officer of the RHS Alumni Association from its beginning in 1997 and served as its secretary for 12 years. Few of the trustees understood quite how she managed to be the #1 Duck Race ticket salesperson for many years once that fundraiser was instituted. She continues to support and volunteer at alumni events.

Bob, after graduating from Ohio State with multiple degrees, taught art for a total of 35 ½ years in Mentor elementary schools and when Ridge Junior High opened, he taught there until his retirement. At the same time, he taught at the Fine Arts Association (FAA) when it was on Spaulding Street in Willoughby. When the FAA moved to its location on the Andrews School campus, he was in the parade celebrating the move and continued in its art department, tallying 61 years of commitment to the organization.

As a sideline comment about Bob, their home is very much a testament to his talent as his beautiful paintings and other creative pieces abound. His use of color, in an extremely detailed style, bring nature’s beauty to the forefront. His interest in animals and ability to capture their “personalities” is apparent on many walls and shelves in their home.

Jeff, a graduate of the Class of ’83, is the older of the Wolf sons and has a long list of dedicated service and work for the Riverside schools. He has a Bachelor of Fine Arts degree in Advertising Design from Columbus College of Art and Design. He is a self-employed graphic designer (www.jwolfdesign.com), and from the beginning of his career, he immersed himself in RHS projects.

Joel, a graduate of the Class of ’86, received his Bachelor’s Degree in Education, with a major in mathematics from the University of Toledo. He earned his Master’s Degree at John Carroll University. He first was a full-time substitute teacher for three years at RHS and is now in his 29th year as a math teacher at Riverside.

Joel’s wife, Kristen Tulenson Wolf, is also an RHS alumna and graduated in ’89. She earned a Bachelor’s Degree at Edinboro University in Pennsylvania. She previously taught in Painesville City schools and has also served as a daycare director and in the medical services field. She is now the Children’s Ministry Director at Trinity Church in Mentor.

Joel and Kristen’s daughter Mackenzie is a graduate of the Class of ’17 at RHS. She went on to earn a nursing degree at Mt. Vernon Nazarene University. She is now a registered nurse at University Hospitals, Lake West Medical Center. During high school, she was a member of the Riverside Regiment for four years and took part in drama productions.

Grayson, Joel and Kristen’s son, graduated with the Class of ’20. He also performed with the Riverside Regiment for four years and was on the basketball team each year. He is currently in his junior year at Ohio University as a journalism major.

It would be an impressive exercise to add up the number of years that the seven members of the Wolf family have spent contributing to the welfare of the Riverside district and to education in general. The two elder members of the family passed down to their two younger generations their strong work ethic, loyalty to their community, integrity, and dedication to service. Jacquie and Bob, now well into their 80s/90s, continue to be active role models for what it takes to be outstanding parents, grandparents and citizens. The school district owes a debt of gratitude to the Wolf family for exhibiting values that have had a positive influence on more people than can be counted. 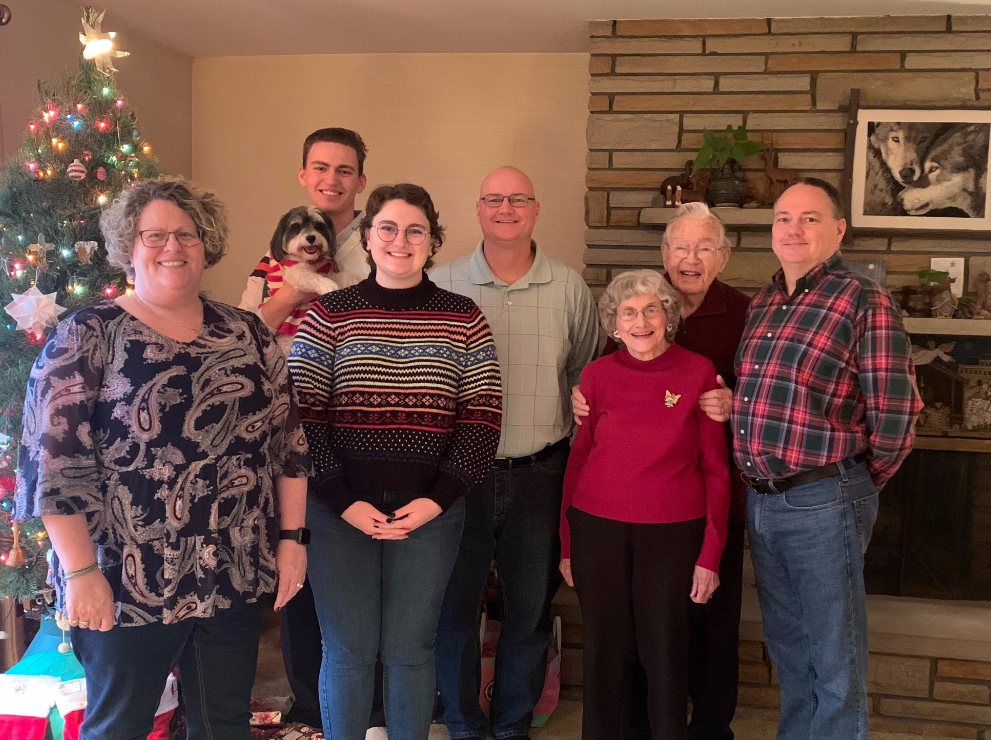