(with apologies to John Steinbeck)

A recent comic strip, “B.C.” by Mastronianni & Hart, used extreme anachronisms to produce humor during the 2022 January “snow event” in the northeastern United States.  The strip’s only character was Grog, who is always portrayed as a ball of hair sitting on top of two skinny legs and having a large nose and rudimentary arms.

Grog was looking at Wiley’s dictionary searching for the word “dusting.”  The definition was “What people in Buffalo call snowfall that everyone else would call a blizzard.” If this comic strip is syndicated in all U.S. newspapers, it might not have had much meaning, but most of us anywhere near Buffalo, New York, understand it. 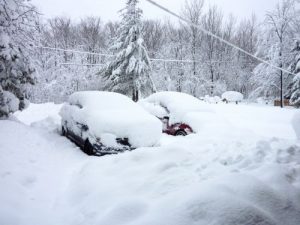 Many people in the Cleveland area take comfort during a heavy snowfall by saying something like, “At least it isn’t as bad as Buffalo.” The record-setting snow of 1978, which had depths up to many homes’ first story windows, saw Buffalo getting depths up to second story roofs.

By the time the first of April comes and the Log is online, maybe the winter of ’22 will be only a memory. I have lived in this area all my life, and I rank it as at least the third most severe and possibly even the second most. If we are lucky enough to get a major weather improvement this spring, most of us will let the unpleasant events of the previous three months recede into memory.

B.C. is a comic strip based on ancient life, but Wiley’s “dusting” definition points out wonderful things about human nature, both then and now: People have the ability to adapt their perspective from negative to positive and also to put difficult events behind them. Just to make a guess here, native Buffalonians must have finely- honed adaptability skills but blessedly short memories. Otherwise, why would they stay there? Why not move to Lake County, Ohio, where there is “hardly any snow at all?”

Possibly this past winter loomed large and miserable for many because the pandemic exacerbated the “stuck at home” scenario so that more of the same was too much to bear. Those lucky enough to have a strong reclusive streak in their psychological makeup were likely to have fewer problems than super gregarious sorts. To the latter I say, “Party on; your time is coming. Stay-at-home types like me will not clutter up your campgrounds, concerts, bars and beaches because all of them will be miserably hot and humid.”

Depression over the confines of the winter of ’22 might be alleviated by an attitude adjustment for all of us.  When the major blizzard hit the middle of January, I now confess I caved into a rather severe case of “The Grumbles.” It began by opening the garage door and seeing two feet of snow with three-foot drifts. My partner, Patrick, backed the 4WD vehicle only a short way out before getting stuck.

The other resident here, Chris, had parked his truck with Pat’s trailer attached in front of the garage where the plow truck was stored, without the plow yet mounted on it. Two vehicles had to be shoveled free by the two men, neither of whom is “burly,” while I was on “heart-attack watch.” It was a nail-biter since it was apparent no help could get through the snow had something happened to them. 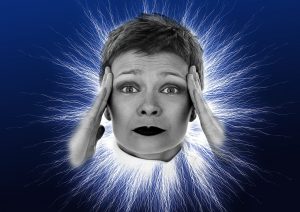 Two days after the vehicles were freed and Chris got the plow truck to the work garage, the furnace gave out down there, and he had to work in the severe cold to get the plow mounted. Two more days saw the gas line that feeds our hot water tank freeze, and it stayed frozen for four days. Later in the week it froze twice more. Then the plow truck developed problems and wouldn’t run.

While I was heating water on the stove to wash dishes, I watched our dogs complaining bitterly because they couldn’t get over the plowed snow and were confined to the driveway. Hours of pooper-scooping in the driveway were facing me. Meanwhile, Pat continued helping his orthopedic patients at his office, Chris worked on the truck plus many other things, and I mostly complained because the week after the gas line defrosted, my dishwasher quit and I was facing the most odious of household tasks all by myself. I had sunk into a real pity party.

Somehow in the middle of everything, I thought back to a time when parents dealt with their children’s discipline problems by using “attitude adjustments” on them. A few times as a Riverside teacher, I attempted such adjustments with my students. At one point about March 2, I finally thought to myself, “I have identified the household problem here, and it is I.”

The real turning point for me, however, came with Putin’s attack on Ukraine. A man whom the news media rightly called “unhinged, psychotic, and crazed” had turned into a mass murderer bent on the destruction of a democracy; bloodshed of any type, including infanticide, became his watchword.  One reporter said that Putin had possibly been pushed over the edge by the pandemic. I disagree with that. His character had long been established. Europe and nearby Asian countries had been war-weary and malleable, hence weak, and Putin knew that.

As indicated above, I have adjusted my attitude. The two fellows whom I love most are okay. Most of my family and friends survived Co-vid and seem healthy. Chris has gotten the vehicles fixed, and Pat has gotten many people’s aches and pains fixed. Our dogs are safe and loving.

It is no longer the point that we didn’t have hot water; the point is we have a home for the hot water to be in. There are dirty dishes around, but they had plenty of food on them. We were not hungry and forced out of our homes like the people of Ukraine were.

There is no joy to be found in contrasting our mostly comfortable lives with the misery in Ukraine or anywhere else in the world. However, we can quit being spoiled cry-babies about what life has dealt us. By geographical location, we have throughout history been one of the most difficult nations for a despot to challenge. Two massive bodies of water are on either side of us and have served as protection until aviation and airborne weapons were developed. We happen to have had a (mostly) friendly country to our north and impoverished ones to our south. The idea of Canada or Mexico attacking us is ludicrous.

However, it is dangerous to be complacent because we are the most powerful country in our hemisphere. The oceans are no protection from the many threats existing in the modern world.

The images of the Ukrainian people and their incredible president fighting back and refusing to give in should have been a lesson to all of us about courage. Videos of the citizens in front of their bombed, desecrated buildings are heartbreaking, but their bravery has been inspiring.

It seems clear that Putin will go down in history as guilty of war crimes of the worst types. Massive demonstrations are being held all over the world against him, including huge gatherings in his own country. The outcome of this disaster is, as of today uncertain; but Putin is certainly the single most despised man in the world now and may surpass Hitler as the worst despot ever.

In spite of the horror created by one man, it isn’t difficult to see that millions of people care deeply about the people of Ukraine. There is already a huge outpouring of aid and money going to help these very brave, patriotic people. For the time being, it is in our individual best interests to take comfort about the millions of people who are rallying to the Ukrainians’ cause and hope that the orchestrator of their misery is consigned to the hell-hole in world history that he has earned.