When a person’s drive to work and back home involves only a few miles, it may not create many lasting memories. However, for a variety of reasons, my 30 years of trips to two high schools during my teaching days included several unusual events.

My first two years as a teacher were at Mentor High School on Rt. 615. During 1965 – ’66, I lived with my widowed father just within the eastern border of Mentor, so the drive to the school was only about ten miles. The route included only flat, mostly straight roads and should have been free of “incidents.”

Other than the usual challenges that snowfall brought, the only negative memory was due to a truly ignorant move on my part, namely one afternoon when I launched (my husband’s term for my usual departures) out of the school driveway and quickly accelerated to 45 mph and heard a police siren behind me. 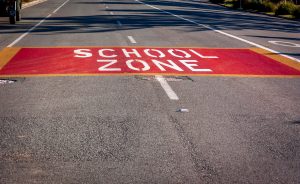 The conversation with the deputy went something like this: “Let me see your driver’s license. Do you have any good reason for speeding at 25 mph over the limit in a school zone?”

My answer was the truth: “I forgot I was in a school zone.”

His response: “There is a sign just a few hundred feet north. How could you miss it?”

My answer: “Because I was already in it; I teach at that school right back there.”

Guessing at the deputy’s thoughts, I later decided they must have been “What kind of an idiot could teach in a huge school but forget it is in a school zone.”

My mindset every day when leaving was so focused on my stress level that making an escape was my only goal. I had hoped to gain the deputy’s sympathy but was presented with a ticket, which he told me I could waive if I wished. I followed his advice. My real punishment was the humiliation in watching the line of school buses rolling by and wondering how many of my students recognized my car. The next day, I waited for questions and comments, convinced I would be the talk of the school. Nothing was said, maybe it was the anonymity of being a new teacher in a behemoth of a building that saved me.

I paid the fine almost immediately and told neither my dad nor my future husband, Chuck Reed, about it EVER.

The drive to MHS morphed into a different situation after our marriage when we moved into a house on the east side of Painesville – one almost in the back yard of RHS. After a second year of driving to Mentor, the shorter distance was one reason I applied to teach at RHS, plus I was not happy being in a huge high school like Mentor’s. The drive to Riverside was only about two miles and included just one stop sign. Barring a train on the tracks, I could launch out of our driveway on Madison Avenue and be at school in five minutes.

However, our move to Leroy Township in 1977 involved many new challenges: the secondary snowbelt; a steep, winding hill with a 90 degree turn at the bottom of the Blair Road bridge; native Leroyites who believed they were the only ones on the road and enjoyed being left of center; curves; frequent detours; and animals on the roads.

Nonetheless, the distance to school was only 7.5 miles, and my average morning drive was 12 minutes unless a pokey driver was in front of me. (My definition of “pokey” was and still is “anyone going less than 5 mph over the speed limit”). The route then had only three stop signs and no traffic lights. It now has four stop signs and three traffic lights.

Most people traveling to the school from the other side of Painesville had a longer driving time than I did, but that didn’t prevent some of them from good naturedly calling my home disparaging names: the sticks, cow country, the wilds, land of outdoor plumbing, etc. 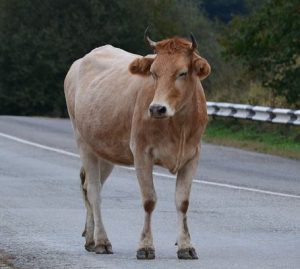 It was well into the fall of 1977 before I paid much attention to there being a farmer’s field with a decrepit fence directly across from a dip in the road just beyond our driveway. One foggy November day, when I left at the usual 6:20, I spotted a large blob in the dip and slammed on the brakes in time to stop just inches from the farmer’s errant cow.

By class time, I was still shaky and told each group about the incident. My mind expanded the image of the mess it could have made each time I spoke of it. I also would have felt very bad about killing the cow and wouldn’t have wanted to deal with the farmer, who was curmudgeonly crabby. By lunchtime, the account had gone around the school, and the “city folks” on the faculty had even more fodder to keep the Leroy farm tales going.

Moving to Leroy did create major adaptations in our driving, but the January, ’78 snowstorm caused Chuck to go way overboard in adjustments, or so I thought. Anyone from our general area alive during that storm remembers it. Most people in Leroy caved in to confinement and went nowhere for many days. The school’s cancellation phone lines were the only “hot” thing around. Combined with a supposed gas shortage, there was no school for about two weeks.

Plows began making slow progress, many of them driven by residents, by the second week of the blizzard. Snow piles along roads and at intersections were way higher than car and truck roofs. My friend, Marietta Lipps and I, no doubt a bit giddy at having so much free time, decided it was time for us to have a little gathering to celebrate cancellation of semester exams. 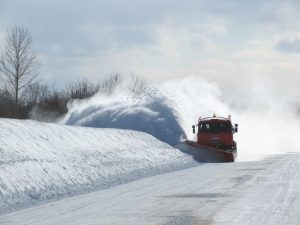 Chuck got the truck ready for the drive to Perry, all of about eight miles, by stocking it with blankets, water, extra clothes and snow shovels (no food; we knew Marietta and Tom would have a feast ready). We knew where the intersections and stop signs were in Perry, more or less; Chuck put the truck into creep mode just before each one; then he stopped and I got out and peered around the snow to see if anyone was approaching. No one was. Since there were no cell phones yet, I had called Marietta from home so she knew to allow us an hour to get there, and it took all of that. The food, wine, fun and friendship made the effort more than worthwhile, even though we chided ourselves for being slightly foolhardy.

That first January in Leroy made Chuck decide I needed more reliable “wheels” to get to school. He purchased a Dodge 4WD truck, which was too high off the ground for me to negotiate. He put running boards on it. Nonetheless, I hated everything about driving it to school except for the seafoam green color. He stocked it with the same aforementioned supplies while I watched and thought, “It’s a lousy 7.5 miles to school. It is Ohio, not the Siberian tundra.” I drove the truck a couple of years and never dug into the emergency supplies.

When American Motors came out with one of the first 4WD automobiles, the Eagle, we were more than pleased to buy one and relegate the truck to Chuck, although he endured some razzing about its color not being macho.

The Eagle served well for a few winters, but mechanical glitches and subpar paint, at least in dealing with road salt, made us think AMC might have been better off staying with Jeeps. 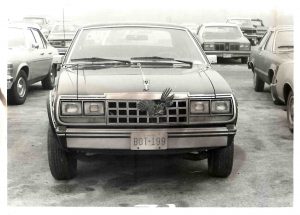 One clear morning while on River Road, I heard a soft thump and looked in the rearview mirror, hoping I’d not hit a small dog or a cat. Nothing was there, and by the time I’d gotten three more miles to the school parking lot, I had forgotten about the thump. Later in the morning, one of my students came in and said, “That is quite a grill ornament you have on your car.” I was clueless until he said there was a hawk embedded in the Eagle’s grill – so much for the thump.

A couple of days later, one of the photography students came in with the picture shown here; the Eagle had won in that battle of the birds of prey. 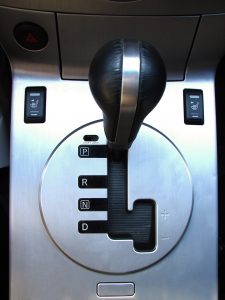 One more adventure was in store for the Eagle and me before its retirement. Caught one morning in a sudden snow squall that topped off a layer of ice, I was driving very slowly on River Road’s bends, but not slow enough to avoid slipping into a ditch that was loaded with snow and ice. By a streak of luck, I had dressed appropriately that day, so I turned off the engine and with difficulty opened the door enough to get out. The car would not restart, and I thought it must be so impacted by snow that it was totally disabled.

A fellow from a nearby house came out to help, and I told him that since the car was fully off the road, the only issue just then was my being late to school. He called the office and told them where I was, and John Weiss, our principal, indicated I should stay in the car and he would send someone out to pick me up. I figured after I got to school, I would call Chuck to come with the truck and see if he could pull the Eagle out.

I forged ahead with two of the morning classes, and our custodian came in and handed me the Eagle keys and said he had parked it in my reserved space. Of course, I was rather blindsided by the simple solution and asked him how he had gotten it out. His answer: “I put it into ‘park’ and drove it right out” – exactly what I could have done had I remembered that cars won’t start when left in “drive,” which I had done in my tense moments. This driving incident was another of those that never reached Chuck’s ears. I went home that evening in even deeper snow and pretended it had been just a normal day.

Only one more driving saga followed, not with any specific events, but with the comment that Ford Motor Company produced one of its worst lemons ever when building the Bronco. Being high off the ground, it handled snow beautifully, but mine was beset by problems: drive train malfunctions, braking issues, and steadily increasing groans and loud noises. After one final year of its clunking away, we scrapped it, having decided that its equine name had been aptly chosen. My friend Carol Benroth had a similar vehicle, a Chevy Blazer, at the same time. it seemed to serve her well, and I don’t remember her saying anything negative about it.

Thinking back over the 56 years that have passed since I was Public Enemy #1 in a school zone, I realize that traumatic incidents can end up as insignificant memories that matter not at all. Who would have thought that on a future day I would be on the Internet telling readers about my driving foibles? In fact, who then was even imagining an Internet?