“One day a hush will fall, the footsteps of us all,

will echo down the halls and disappear.”

In my 80th year now, I still hear the fading footfalls of classmates on the hallowed halls we occupied several decades ago. 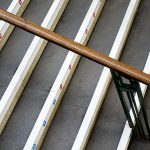 I hear the fast clomp, clomp, clomp of my own feet racing up the stairs at Hale Road School, careening around the corner to my classroom, only to knock over my first-grade teacher, Mrs. Olson, who was my height but a few pounds lighter. 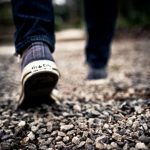 I hear the hesitant shuffle, shuffle, shuffle of shoes on gravel as I oh so slowly meander around the building near the end of sixth grade with Bob, my ‘boyfriend,’ slowing with each step; each of us wondering if there would be a next step for us. 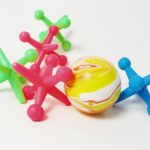 I hear the pong, pong, pong of a jack’s ball at noon on the floor of the classroom where a daily tournament was held. And the scrape of a hand across the wood floor to quickly pick up the required number of jacks. 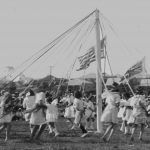 I hear the soft swish, swish, swish of sixth grade girls skipping around and around the Maypole in the grass in front of the building and hear the rustle of my new pink, polka dotted dress. I just now, in my 80th year, wonder how my parents paid for that dress, surely the prettiest I had owned up to that point. 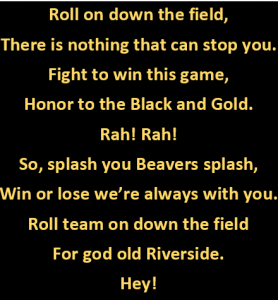 Step, step, step: Eight steps between each yard line as the band marches down the field. Black and gold uniforms and gold plumes inserted into hats. Facing the home bleachers, the 100 musicians belt out the fight song.  Given freedom in the third quarter to roam freely under the bleachers and visit the refreshment stand.

Splash, splash, splash! What other fight song in the history of high school sports in America has the command to “Splash!”?

Cha, cha, cha! After the football games, win or lose, the latter being a more prominent ending that the former in those years, we walked over to the cafeteria to wait for the football players to shower and dress and show up to dance, the outcome of the game forgotten. 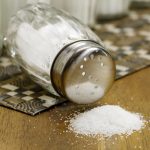 Shake, shake, shake! Each of the four of us in the Home Economics cohort, unbeknownst to the others, liberally salted the creative offering of the day, macaroni and cheese. Compelled by the teacher to eat what we made, it was predictably gross and probably contributed to today’s high blood pressure. I have not eaten mac ‘n cheese since. 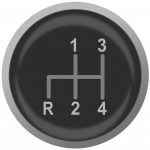 Vroom! Vroom! Vroom! The sound of student drivers attempting to find the exact dispersion point of the drivers’ education car clutch (standard shifts in those days) to keep the car from sliding back down into the car behind at the Madison Avenue, Route 84 hill. 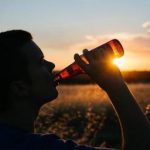 Glug, glug, glug! The sound of the lead in the class play, slipping out to the parking lot to refresh and reconstitute himself between acts. I don’t know if he ever made it big in show biz, but he was a dramatic star every year for us and never missed an entrance.

Si! Si! Si! The sound of the Spanish Club meetings, of which I was president, getting shorter and shorter as the sponsor required that all club business be conducted in Spanish and our (my) lack of grasp of the language became more apparent month after month. 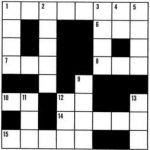 Amo, Amas, Amat. Second floor, last room in the hallway across from the chemistry lab…Latin class. Never thought I’d need Latin but in my seventh decade these three verbs pop up in every other crossword puzzle and I’m grateful. Thank you, Mr. Moore! 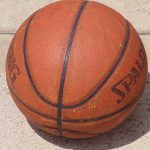 Grump! Grump! Grump! Every Monday after a basketball game loss there would be a Chemistry pop quiz. The teacher was the basketball coach and did not handle losing graciously. We suffered. On the other hand, the quiz was never a surprise since we had all been at the game the Friday before, thus having two days to study. 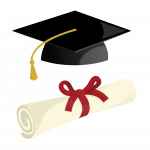 Hesitate, step, hesitate step, hesitate step! A hundred and ten graduates making their way down the two main aisles of the auditorium to the sound of the band playing Elgar’s Pomp and Circumstance. That slow halting step, the step that launched us into the future is the final tangible sound reverberating throughout the alma mater, becoming an echo the next morning.

The echoes of my feet are long gone from Hale Road School and Riverside hallways. The echoes disappeared just as the alma mater predicted they would. 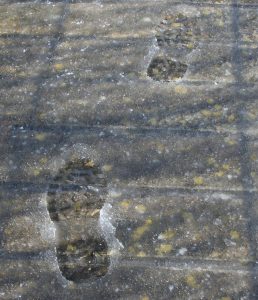