Any parent or teacher of teenagers tends to learn early on that the emotional responses teens exhibit are usually outsized and often extreme, especially if events involve startling/scary happenings. In addition, when confronted with unexpected situations, teens are prone to needing much time to expound with their peers about them afterward.

Most teenagers are similar in size to the adults around them. Meanwhile, older people can be taken aback by the extent of junior and senior high schoolers’ reactions to unusual things; it is easy to forget that teens haven’t been around long enough to experience what adults take for granted. Fierce thunderstorms, for example, become ho-hummers only after one has lived through several of them. 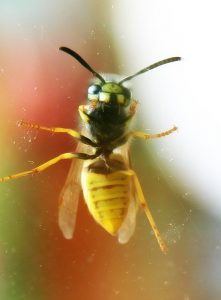 Any teacher in a classroom with windows lacking screens can probably relate to what a ½” bee or wasp can do to the organization of a classroom in any school during a sunny day in spring or fall.  The life lesson about staying still and ignoring a stinging insect takes a few years of experience to absorb completely.

Hollering, screeching and jumping out of seats are typical behaviors of young people confronted with such tiny monsters. A teacher quickly learns that if students can’t exit from a bee’s presence, a sermon about sitting still will not subdue them. The only choice is to let the chaos reign until the threat is over, allow them to expound about it, and hope the next day brings a cool rain.

Before explaining the January 1986 event that created probably the most profound scare during RHS’s history so far, an explanation is needed about the high school’s heating system at that time. THE BOILER had a pervasive reputation as a malevolent demon within the school, primarily because it created a good deal of discomfort in nearly every room of the building, except for the very few that were air conditioned. Some rooms stayed in the lower 60s all the time.

Very few of the rooms could maintain a typical human comfort level of about 68-72 degrees. There also was no pattern about the rooms’ temperatures; a room at a constant 82 degrees could just as likely be right next to one that was 62. The frustrating part was that the “things on the walls” were NOT thermostats; they were thermometers, which could not be adjusted.

Knowing that adjustments were not an option didn’t prevent me from trying to change things one year when I had been moved to a different room. The first day of school on that hot August day, I went to open the window right above the radiator and felt hot air belching out of it. On my first break, I sought out our maintenance man, who explained something I had been told before: “We can’t turn the boiler off because the hot water is controlled by the same lever as the heat. The locker rooms and the kitchen need the hot water.” I had heard this explanation before, but it had sounded so absurd that I only half believed it. On a mid-winter day when the thermometer one morning in that room read 95 degrees, I became a believer.

THE BOILER was, therefore, the butt of more complaints than any other inanimate object in the school. Hearing any strange, loud noises evoked comments of “Must be the boiler.” When thunderstorms with lightning rolled by, comments were, “Hope it doesn’t strike the boiler.” During non-school hours, if something brought the fire department to the parking lot, RHSers driving by were likely saying, “Bet the boiler blew up.” The overall impact was a school full of students and faculty half fearful they would meet their final hour being exterminated and entombed in the RHS basement because of the boiler. 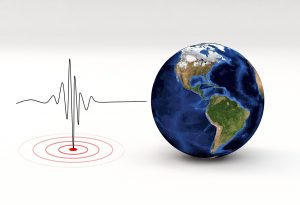 Then came the day in January of ’86 when our area had an earthquake – enough to measure 5 on the Richter scale. It was about 11:15 a.m., during 4th period class. I had a small group of honors English students when the rumbling began.

I will never forget the 14 pairs of the widest open eyes I’ve ever seen looking at me for answers, as the word “boiler” circulated. My “be calm and cool gene” kicked in.  When the floor began to roll but there was no explosion, I said to them, “I think we’re having a little earthquake.”

Start to finish, the interruption was only about 20 seconds long, and I told the class it was probably over. Because my husband had traveled often to Mexico and Central America and described what a quake was like, I had figured it out from the moving floor. When I got home that afternoon, he said, “Certainly you started to move the kids out of the building, didn’t you?”  (No, I hadn’t).

Few of us in the building had much knowledge about earthquake protocol.  As far as I know, only one teacher, Jack Lakus, had begun leading his biology students out of his room. In reality, “our” quake was the kind in which Californians would have pushed their knick-knacks back into place and continued with their day. Damage in our area was minimal, but the shaking covered a fairly large area. Other than many temporarily panicked young people, the experience was soon consigned to history, but many probably still speak of it. Once again, the boiler had been wrongly maligned by almost everyone at RHS.

Moving on to one more incident, I was inadvertently responsible for causing a sudden jolt for about 26 sophomores in my class one day. They would have bounced right out of their desks except that the seats and desktops were one unit so that one had to slide out of them rather than bolt directly upward.

I was prone to getting bad colds every September, and they almost always began with a sore throat and sneezing. My sneezes were occasionally explosively loud and nearly always came on me with no warning whatsoever. Since it was early in the school year, it had not occurred to me to warn my classes about the sneezes. One day it was very hot, the windows were open with gusts of wind coming through, and the classroom door was ajar so that we could at least get a cross breeze. 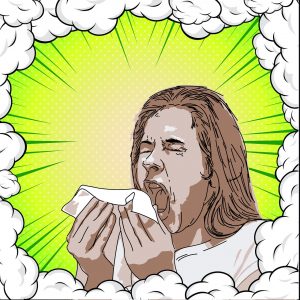 As bad luck would have it, the tenth graders were writing their first composition in my class that day, a common assignment I gave early each school year to assess their writing skills.  Because they were concentrating on writing, when I sneezed with a very high decibel rating, everyone jolted wildly; but the reaction was doubled because a split second after my sneeze, a gust of wind blew the door shut with a very loud BAM.

The faces that had been staring aghast at me quickly swung to the door, and it was only another split second before the person in front of my desk blurted out, “You blew the door shut!” Trying to add a light touch to it, I answered in the affirmative.

Chaos ensued. The incident was so long ago that I can’t be precise about the comments, but in rapid fire, they were along the lines of “Stay clear of Mrs. Reed when she has a cold” and “I’ve never known anyone else who could close a door from 20 feet away,” etc. Simultaneous laughter filled the room, and no one’s was louder and longer than mine.

After gaining back my senses, I apologized profusely for scaring them, and someone said, “Can you warn us the next time you feel a sneeze coming on?” I responded with the truth: “I hardly ever have time; my sneezes are just suddenly THERE.” Attempting to gain control, I told them they had only a few minutes left to finish their essays.

Teenagers are not about to let something like that pass without further discussion. I for sure remember someone saying, “I can’t write more,” “I’ve lost my train of thought,” and “you nearly gave me a heart attack.” One more apology followed, and I made a mental note to give each class the next day a head’s up about my sneeze potential. However, the memory didn’t carry over to another year, so no doubt other classes were my victims. At least the slamming door coincidence did not repeat itself.

Skipping a few years and remembering my last year of teaching in ’95, I did not want to leave the building without seeing the basement at least once. On my last full day there, I asked Bob Smith, maintenance supervisor, if he’d lead me through there. Friendly and kind as he always was, I got a complete tour, including the shooting range where the Rifle Club had practiced, the maze of wiring and plumbing, and the despicable boiler.

Like so many things that can loom large and threatening in our minds when we are young, the boiler seemed nothing of the kind – much smaller and non-descript than I thought it would be. When Jim Kalis, the present superintendent, told me the heating system had been replaced, it was good to know that no one in the building should be shivering or sweating.

The basement itself was huge, clean and brightly lighted – a pleasant surprise. That old boiler didn’t swear at me, and there wasn’t even a dust bunny to make me sneeze on my way out.