Many years ago, around 1955-59, I was a student at Riverside High School. I chose to take all commercial courses: typing, bookkeeping and business machines with hopes of someday working in an office as a secretary.

In our senior year we were assigned to teachers to help with copying articles or any other secretarial needs they may have needed. Well, as luck would have it, I was assigned to Mr. D.W. Shaner, the English and drama teacher, who was a perfectionist about everything, and to Mr. John DeLong, American History teacher. Wow! How would I ever survive the year with Mr. Shaner? Well, guess what? I did, without any problems.

Graduation day came and we had to clean out our lockers. When I was done and began to walk down the Halls of Ivy, I thought to myself with sadness that I would probably not ever come into this school again. I would have no reason to do that.

After graduation, I was hired as a secretary in an office whose boss was never there but traveled a lot. I answered phones and took orders and made sure that orders were being shipped. A short time later my mother had a stroke and someone would have to be always with her. My father was still working at the time as well but due to retire soon. So, I quit my job to help take care of her.

On the street where I lived there were three school buses parked at various locations. One just happened to be across the street from my mother’s house. One day, the lady from that house where the bus was parked was over visiting my mother. I asked her how she liked driving the bus and she replied, “I like it very much. Are you interested in driving? They are always looking for drivers.”

I thought it over. Driving the bus would not keep me away from home all day. My father worked afternoons so it would not be much of a problem. So, over to Riverside I went.

I met with Paul Spear, who was the transportation supervisor. Things went well and I was hired as a substitute bus driver. He was excited to have me join the ranks because I was familiar with the Leroy area.

My test for being able to drive that big YELLOW BUS consisted of about 20 minutes of driving to see how I could handle the bus. I drove east on Route 84 out to River Road in Perry, to a turn around on Blair Hill and River Road, then back to school. Mr. Court said, “You are hired.” I asked, “That’s it?” He laughed and said no, there will be some testing that I would have to study for and a driving test in Fairport. The rest is history!

I was sure I would not drive a school bus for long because I had thought I would not like it. But the story turned out differently.

I was one of seven female drivers of the total fleet of 20 buses. At that time in the early 60s, most of the men held other jobs in the school district as mechanics or custodians. They would drive their routes, then go to their other jobs to work until it was time to take students home. As the district grew larger and we were covering more areas, so did the fleet.

The bus routes were assigned to the drivers based on where each lived, and routes would begin close to each residence because buses were kept at home. Buses were not kept on the property at Riverside as they are today because there was no room for them. If you did not have room at your home to keep a bus, they were parked at the local elementary schools. 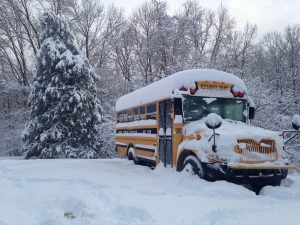 Since I lived in Leroy, my route began in Leroy, and I would work my way into RHS for drop off. Winter times in Leroy were tough and sometimes a real challenge because our early hour of student pickup was usually before the plows had been out. Hills like Callow Road, Blair Hill, Williams Road, Cascade Road, Paine Road, Trask and many others were a real test.

Our source of communication back then was by CBs (citizen band radios), and everyone in the county would hear our conversations. If in Leroy and stuck on a hill, I could call the road department drivers. If they were in the area, they would come to our rescue and throw cinders down the hill so that we could continue our way. Many times, we would ride the berm of the roadways down the hills.

One year in March we had a light rain in the morning falling on the already frozen snow on Callow Road. I turned off Radcliffe Road onto Callow and made my pickups to the top of this very steep hill. I sat there and looked down at that hill. I knew in my mind that there was no way I could make it down without going into the creek below. So, I called on the radio about my situation, and they sent out this huge dump truck loaded with cinders.

One of the workers stood on top of the truck bed and threw the cinders over the hood of the truck as the driver would travel down the hill. I could do nothing except hold my breath because I just knew this was not going to end well. The truck began to move down the hill, and the first two or three shovel loads worked as planned. Then, the truck began to slide down the hill towards the creek bed. The man throwing the gravel jumped off the back of the truck, and the truck stopped inches away from the creek. No one was hurt, but it was very scary to watch, and the students on my bus were afraid that I was going to try it next.

Instead, I backed up my bus for over a mile to get turned around and head back the direction I had traveled. Now I had to get to the other end of Callow to pick up students on the other side of the steep hill and find other roads to get me where I needed to be. Finally, I picked up my students on Callow then had just a few more stops before heading to school.

At my last stop there were two brothers to pick up. At that time students wore boots to school and carried their shoes. When I approached this pick up, I noticed that the older student had his arms full of books and his shoes were resting on the top of books. As the students crossed the road, the driver was to watch and count the students as they boarded the buses.

I watched the young one step up on the bus and sit down, but then, when I looked back for his brother, he was nowhere to be seen. I looked at my cross-over mirrors that view the ground in front of the bus, and all I could see was a pair of legs sticking out from under the bus. My heart dropped. It turned out he had dropped his shoe, it had slid under the bus, and this young man had crawled under the bus to get it.

OH, MY GOODNESS! Students are trained that if they drop something, they are to get the driver’s attention before retrieving it. Well, he did not. He crawled from under the bus with his shoe in his hand and came up the steps of my bus with a smile on his face like nothing had happened. WE HAD A COVERSATION! Well, by now my knees were a bit weak from my stressful morning. A phone call was made to his parents to let them know of the incident before he arrived home with his story.

One day I was given a brand NEW BUS! An automatic. WOW! No more shifting gears. The students were so happy to have a nice bus. Except one day, one student was so excited about getting new crayons for school that he decided to check them out on my bus, and I mean on my new bus, while he was sitting right behind me. During the route he drew a picture of his home on the side panel next to his seat. He did this on MY NEW BUS!!! To this day when I see him from time to time, we do laugh about his coloring project! At least I can laugh about it now.

As the years went by, the bus drivers would become friends with the students and families because we would keep the same route year after year. I saw many students grow up and followed them through to their graduation day.

I remember some of the younger ones who would TELL ALL about what was going on in the home. These stories were never ever told again once I explained why they should not be talking to people about those sorts of things. But I was always ready to listen because you never knew if children needed some sort of help with issues that they were having either at school or home. I had only a couple of those, thankfully.

The school used to have late runs out of RHS for students who stayed for sports, meetings, clubs, etc. There would be only three or four buses that would take specific areas. We were paid a large sum of money, $2 an hour, for this trip and then end up in our storage area for the buses.

One time when I was doing a late run for the Leroy/Concord students, my bus broke down in Concord. My boss sent me a different old bus that was stick shift, and I had not driven a stick in years. The seat was so low that I could not see over the steering wheel, so one of the high school boys gave me his books to sit on.

The students were all wound up from whatever events they were participating in, and they began to laugh themselves silly. Then it was time for me to shift gears, and I didn’t know one had to double clutch it to shift gears. Grind, grind, grind, and the laughter grew louder until I finally figured it out. So, I pulled myself together and was able get through the gears properly. Well, a few boys were still laughing as we approached their stop. One, when he got off the bus, said, “Miss Walker, grind me a pound while you’re at it”. Another student, who had never ridden the bus before, said as he got off, “I did not know that riding the bus could be so much fun!”

And where do I spend a lot of time since retirement? Riverside Alumni Association planning the Alumni Picnic. Where else!