Good morning, music- loving students. Today we will have a music history lesson that will instruct you in how music’s origin is not always straightforward. It is more complex than having a composer simply sit down and transfer lyrics and symbols onto a page. Many well-known musical compositions have a convoluted story behind them that one would hardly suspect. We will begin with some older compositions and work our way through to some wonderful music of the second half of the 20th century.

Part I – Classics of America from the Early 1900s

Many “big band sounds” developed during the first half of 20th century. Some of these compositions give the impression of being “high-brow” so that young people find them uninteresting and too pretentious to be relevant to their tastes.

However, one of these classic melodies had its origin in a very simple, salt-of- the- earth type family that would qualify as “rednecks.” It all began when Bubba Hilwilyum and his wife Tammie-Sue were preparing for a camping trip, and it so happened their young neighbor, George Gershwin, was helping them pack. Tammie-Sue was so busy getting their baby Jimmy-Bob dressed for the chilly weather that she almost forgot to put the pop cans into their truck. Bubba told Tammie to use one of the baby’s old quilts to keep the pop cold. Bubba had a lovely singing voice, and in telling Tammie what to do, he broke out with “Wrap Sody in Blue.” 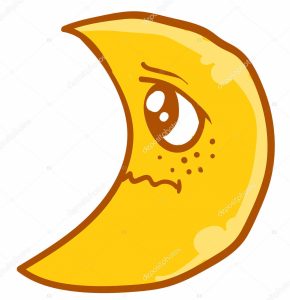 Another classic song from about the same era had its origin at a New England train station. Passenger trains were very common in the ‘40s, and much of New England consisted of tiny towns far apart, with each having its own station, and sporting the only bright lights around. A young fellow from Maine was on board one of these trains; he had a Type A personality and was driven to distraction by the train’s slow pace and frequent stops. Upon seeing several people waiting under the lights at one of the stops, he decided to liven things up by stripping off his pants and sticking his bare butt out the window. A youthful singer, Frank Sinatra, was on the platform and immediately began crooning “Moonlight in Vermont.”

Folk, rock and roll, country/western music, and blues all reached pinnacles of popularity during the second half of 20th century. Many compositions are a blending of categories so that classifying them becomes difficult, so we will divide our study into simple concepts. 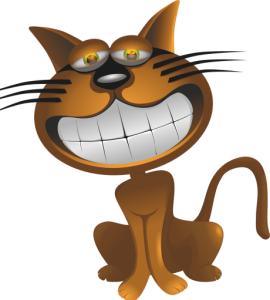 One doesn’t usually think of singers and songwriters as being much interested in science, but two famous men conceived of an idea for a famous song after they read an article dealing with chemistry. The article by a chemist at the FDA warned people not to re-use plastic water bottles because of harmful chemicals that could leech into the contents. It further stated that people wearing dentures were especially at risk because the materials in their false teeth could react negatively with chemicals in the bottles. Paul Simon and Art Garfunkel took the warning much to heart by putting it to music in “Bridge Over Troubled Waters.” 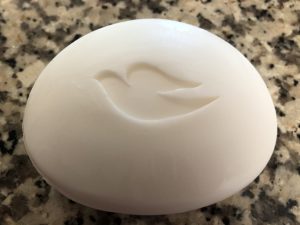 Sometimes the seemingly silly things that happen to creative musicians can be the impetus for songs. For example, Ferlin Husky during the 60s was inspired to write his #1 hit while showering. The slippery soap bar went flying out of his hand, and Ferlin then composed “On the Wings of a Snow White Dove.”

One of America’s most successful music duos created a blend of rock and blues that they dubbed “rock and soul.” Their most melodic years began shortly after they were college friends together. They achieved great fame from 1970 – ’85 and are still performing now. A lesser-known saga of the pair’s background involves a couple of years when they indulged themselves in their love of the outdoors and animals and decided to operate a farm. 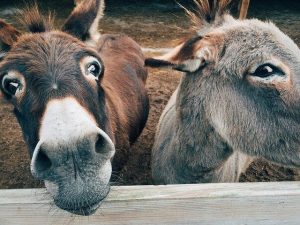 They first bought an adorable small donkey and named him Li’l Guy. The animal became larger and more incorrigibly undisciplined daily, but his owners loved him anyway and re-named him Big Guy. When the novice farmers realized he had become a real nuisance, they thought a girlfriend might settle him down, so they purchased a full-grown mare for him and named her Lilly. She loved horsing around during summer showers, so her owners had to hoof it through the troughs to rein her in.

Lily didn’t help Big Guy settle down at all, but when his owners took him for a vet visit, the vet 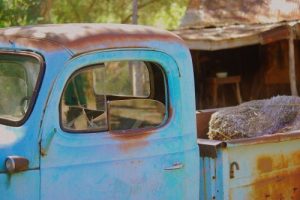 suggested it might behoove them to have the donkey neutered to make him more docile. This action was successful, and Big Guy became “the gelding for Lily.”

After several months of adding more animals to their growing herds, the farm owners still found the work enjoyable but tiring and decided to sell the farm and pursue their musical talents full-time. As a reminder of their early years devoted to trucking grain in for their horses, cows and donkeys, the guys vowed to never forget those fun times and named their touring bus “Haul-n-Oates.”

Once in a while a musician and/or a band becomes iconic because of a new, specific category of songs that can be called “regional.” The Beach Boys achieved great fame by making California sound like THE best possible place to live. They extolled the state’s beautiful coastline in a variety of songs and probably increased West Coast tourism greatly, especially with the release of “Surfin’ U.S.A. (Now, much of California is more like “Smoggin’ U.S.A.”). 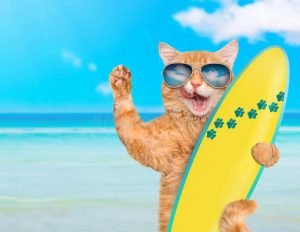 One member of the Beach Boys, Brian Wilson, was a true animal lover. Late one morning he was working in his yard when a tiny kitten wandered up to him. Since the little gal attached herself to him immediately, he knew he should keep her and took her inside for a bath, fully expecting her to object to water. To his surprise, she loved being in the tub. He also felt his band mates would make catty remarks about his new pet and began thinking about a secret way to take her on his surfboard with him. He made a few adjustments to his toiletries fanny pack and carefully tucked the kitten in it before he headed for the beach. Only then did he decide that an excellent name for the kitten would be “Tidey Cat.”

Rock and country music contain lyrics that cover many human experiences: tragedies, humor and mysteries. In our next class we will learn about some of those famous bands and singers.