Class, today we will begin a unit about birds, one of the most numerous and easily recognized categories of animals. The study of birds is called ornithology. John James Audubon has been known as America’s most authoritative bird expert.

People enthusiastic about birds used to be called “bird watchers,” but recently “birders” has become the more common term. An exception to the spelling and pronunciation of the term can be heard in New York City, where one can see “boiders” in Central Park.

One lesson birders should remember before craning their necks and looking directly upward: They are at risk for getting an eyeful. It is better to shield the eyes with sunglasses or binoculars.

Many birders avoid painful neck strain by installing bird feeders right outside their windows, especially if they live in cold climates. The unfortunate side effect of bird feeders is that their owners are unlikely to eat like birds themselves. No one wants to watch even a tiny animal gorge without imitating it by snacking – so much more fun to add a few pounds in a warm house and avoid trudging through snow in the forest. Once birds discover a new feeder, its owners become enablers to the feathery critters, who hover outside the window demanding more food. 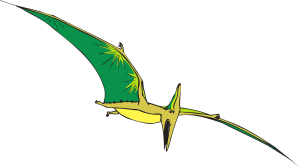 The original flying creatures evolved from reptiles and are known only by their fossil imprints. The pterodactyl is the only flying reptile known to fossil hunters.

Its name means “winged finger.” It had a long, slender head and neck and a very short tail. Because it could get airborne, it considered itself far superior to the huge dinosaurs and would show its disdain for their size by flying overhead and taunting them. Since both the pterodactyl and all dinosaur species went extinct, perhaps the flight was “the fickle finger of fate” for all of them.

Eventually multitudes of the class known as Aves evolved into thousands of species, some tiny and some huge. We will examine the characteristics of some of the most popular and common birds in North America. 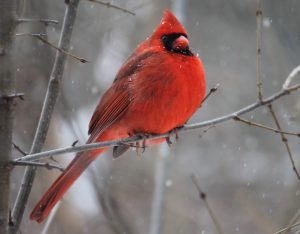 The cardinal is a welcome sight for northern regions; the male offers a colorful reprieve from dark, dingy winters. Especially in the heart of snow season, artificial cardinals decorate homes as testimony to how beautiful they are. Unfortunately, the real ones are often unable to see window glass, so a birder who wants to attract cardinals to a feeder should let the outside of the window get filthy. No one wants them bonking themselves to death.

Cardinals have huge variations in size, and the largest ones are found most commonly flitting inside Catholic Churches or in religious parades. These church officials prove the beauty and value of the male cardinal and have altered their outer clothing to be the same color as the birds’ feathers.  There are no female cardinals in the Catholic Church, but if there were, they would dress in brownish green like their flying counterparts.

Athletes in the Riverside School District are very familiar with another local species known as the Mentor Cardinals. The males of this group fly only at low-level altitudes, most often when chasing an oblong prey called a feetball. These cardinals have renamed the object because of their pride at being ambipedous – equally adept at using both left and right feet. Although it is rare for cardinals to be big and strong, the male Mentor birds are a flock to be reckoned with. 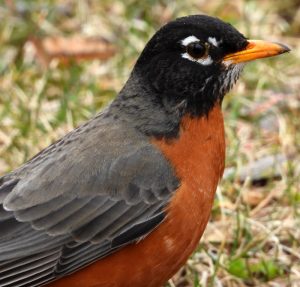 Robins are considered harbingers of spring by northerners who are tired of winter’s bleakness. A closer look at this bird, however, makes one see how much it loves to “rob in” one’s yard.

As a species it is narcissistic enough to think it is especially welcome in yards of people who love to fish. Robins rid the soil of the tastiest, most reptilian nightcrawlers. The birds are so busy chowing down after their long flight north that they forget they should be building nests until all the good twigs and straw are taken by other species. Robins are left having to build their nests on the cheep.

In addition to being behind the seasonal curve, robins are very territorial about their northern homes and tend to return to the same ones every spring. More specifically, they are even drawn to the same branch on the same tree each year. When a young pair of robins builds a first nest, they instinctively choose a branch with a shiny new car under it. The cowardly pair will abandon the branch with the first snowflake and return the following spring determined to find another new car under the same branch. 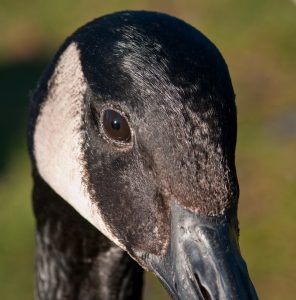 Canada geese are one of the largest bird species in North America. Appropriately categorized as “waterfowl,” they have the ability to foul every dike around every pond in their home neighborhood. Each spring, they remind people that their beautiful lakes and ponds do not really belong to those paying the taxes on them.  Furthermore, these geese are a protected species, so killing them is illegal. People who break that law are called “orneryologists.”

The Canada goose is nicknamed the “honker,” a term filled with irony since the bird dutifully ignores cars honking at it, even if it is itself honking along in a parade with its kin.

We in Lake County have a very faithful pair of geese, Splat and Splurch, who return year after year to the cleanest inland water spots they can find. Two years ago they deviated too far south of their normal route and were delayed getting back to Ohio. By the time they made it here, they were infested with bugs from being in the warm climate too long. Pushing seven years old and being very tired from the long flight, Splat told Splurch he was distraught from the itching and  wanted to retire permanently in the colder climate.

As they descended from 3,000 feet above ground, Splurch told Splat, “I’ve always dreamed we could be in a movie. I agree we won’t go south again; we can call our movie The High and the Mitey, and it can be based on our autobiography The Seven Year Itch.” 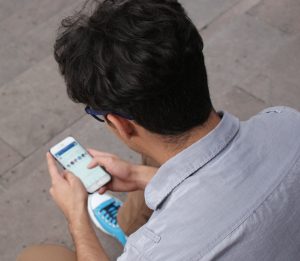 One of the most familiar bird species is the tweeter. Oddly enough, despite its ability to fly very well, tweeters of many types are often found inside buildings.

Their colorful plumages are without limit, and their sizes can be very small to very large.

Tweeters have hunched over postures, and unlike most birds, can understand language and most can speak. These birds can even form repetitive phrases and take delight in staring at lighted, rectangular shapes.

The largest of the species is the gold-crested tweeter, which has a leader that flies more often, farther and higher than any other tweeter. The leader tweeter spends much of his time airborne over the United States but can be spotted at high altitudes over many parts of the world. 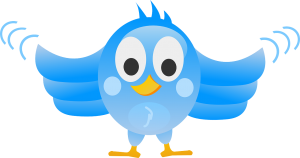 He has a flighty swath of yellowish, wispy feathers across his forehead; his face is light orange with pure white rings around his eyes. His neck is also orange, but his major plumage is deep blue. Down his chest runs a strip of red, or red with white stripes. His clothing symbolizes his native country. He lives in a huge white nest in a temperate climate and enjoys the acreage around him since one of his major wishes is to own a pet elephant someday. He watches over a large flock of tweeters in his nest and often trumpets his wishes to them.

With that instruction behind us, dear students, I believe our intense science lessons need a rest and it is time for you to have a much different subject area to explore.  The music teacher has graciously agreed to enlighten you with a new version of music history, one far different than you have heard before.  She will greet you in a couple of months, so stay tuned!.