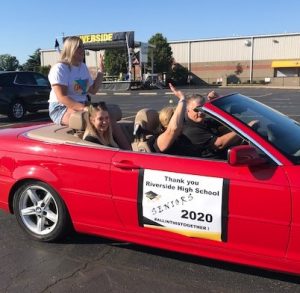 A pre-graduation celebration parade unlike any other in Riverside’s history was organized for Friday evening, June 12. Spearheaded by   Jaime McIntyre, senior class advisor, the school parking lot was colorful, noisy with horn-honking and full of cheering, smiling people. The event was designed to be a prelude to the socially- distanced walk across the stage as seniors receive their diplomas.

Although few RHS seniors are likely to be thinking now about the far distant future, their graduation ceremonies will probably be topics of conversation for generations of their families that follow them.

The pandemic of 2020 required major changes in settings, organization and protocol that have been expected formats for high school graduation ceremonies almost since America’s existence as a country.

News that social distancing required closing the school doors for most of the spring semester was heart-wrenching for most of our seniors. Gone were spring sports, on-campus senior events, academic and awards assemblies, prom, and traditional graduation ceremonies. For many if not most seniors, tears of joy at crossing a milestone in their lives were replaced with tears of sadness at traditions being permanently canceled for them.

However, there was little if any sadness demonstrated at the June 12 parade done in honor of the 2020 class. Instead, the parade of vehicles navigating the school parking lot was full of grinning graduates, their parents and friends. Many of the cars, vans and trucks were decorated with signs, banners, streamers and balloons. Some had signs thanking the school staff, while several stated the college plans of the rider. Several of the seniors had brought their obviously much-loved dogs, most of them black labs and some wearing gold “scarves.”

RHS alumna Loretta Vandervort, an alumni association board member, had made a glittery sign saying, “2020 Seniors Rock” and brought pom-poms for herself and fellow members Beth Knezevich and Gretchen Reed to display as the parade progressed. Beth is too young to be a part of an inside joke, but Loretta and Gretchen considered themselves a “vision of how these teenagers might someday look.”

Jaime McIntyre seemed omnipresent on the scene as she spoke to news media, directed parking, and made a wholehearted effort to welcome everyone.

The Riverside community once again came together and for more than an hour succeeded at turning a negative memory into something positive.

A video of the parade is available on Channel 19.