If the above title appears to be an impossible paradox, in reality it is, but in dreams anything is possible. That strangely loaded truck is part of my RHS subconscious memories. Doesn’t everyone at some point wonder about his or her dreams and how ridiculous they sometimes are?

Dreaming about one’s workplace after retirement is, I think, common, and I’m making a guess that most people’s dreams about their workplaces contain unpleasant images. The dream scenarios may not be true nightmares but more often “frustration” sequences.

I have had very frequent dreams about RHS – things like trying to trek to school but never getting there, misplacing the papers I’d just run off on the ditto machine, or losing my bookbag somewhere in the building. The last two images are based on things that, unfortunately, I had done frequently in my 28 years in the building.

Often, I have wished that these dreams would cease and desist, but now with almost 25 years of retirement behind me, I’ve faced the reality that they will continue for the rest of my life. 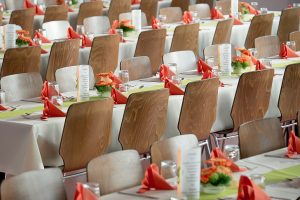 However, it was a great surprise to me that a few months ago a totally new dream setting disturbed my REM sleep. Set in the RHS cafeteria’s kitchen, there were several hundred people in the cafeteria for some kind of charitable event that had advertised sumptuous meals to attendees.

The event’s committee had assigned volunteer roles, and my long-time colleague and close friend, Carol Gregg Benroth, and I were assigned to the kitchen. 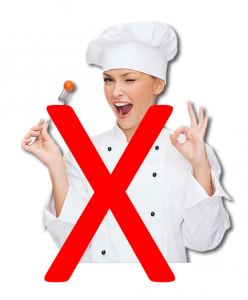 Digressing as I always do, I must add that no “assignment” could have been a greater anomaly than Carol and I working in the kitchen; let’s just say that for both of us, kitchens are the least favorite rooms in our homes. Neither of us flat-out likes to cook.

It isn’t that we aren’t capable of getting a tasty, well-organized meal served; we have each consumed some really good food in our respective homes. And I think we both agree that entertaining others has rewards; cooking for friends and family isn’t as much of a chore as the day- to- day preparation is: the slog through the grocery store, assembling the ingredients, the cooking itself, and then the clean-up.

Carol was lucky (or wise) enough to marry a man who likes to cook (or maybe just dislikes it less than she does). I, on the other hand, married a man who was the second oldest of ten siblings.  His job every 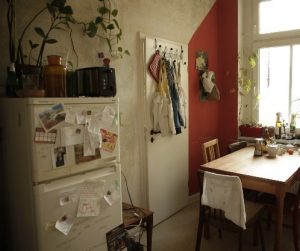 day after school was to peel ten pounds of potatoes. By the time he and I were married, he was 35 and had been divorced for seven years; he was tired of preparing meals, and because I was 22, looking ahead to decades of cooking hadn’t crossed my mind.

What does a 22-year old know of reality? NOTHING. Of course, I would have married him anyway; I’m just saying I hadn’t planned on living with a man who pretended he couldn’t locate the fridge, otherwise known as “that big white thing in the kitchen.” 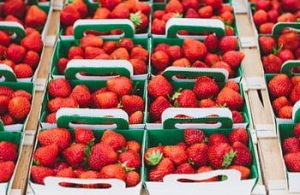 Back to my dream in the RHS kitchen, Carol and I were sent over to the cavernous stainless-steel sinks and told to fill them full of cold water. A massive dump truck backed up to the door and unloaded bushel baskets of fingernail sized strawberries as another volunteer hauled them in to “our” sinks.

We were to wash and de-stem them, put them into bowls, top them with Redi-Whip and set them on the counter for the servers to take out to the already over-stuffed diners.

We were well aware that no one would leave until getting the promised desserts. Carol and I are both about 5’, 2” tall and could barely reach into those sinks. 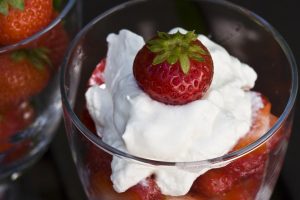 At some point I grumbled to her, “Whoever assigned us to this task sure didn’t know anything about us.”

We hadn’t completed much de-stemming before I told her, “We can’t go on like this,” which she agreed with (She and I had very rarely disagreed on anything in our long friendship).

We began throwing the berries with stems into the bowls and squirted enough Redi-Whip on them so that no one would notice. Ha! Strawberries are not supposed to be “chewy.”

The dream ended with the servers unable to keep up with taking the bowls out to the diners, Carol and I strawberry-stained from the waist up, strawberries knee-deep on the floor, and she and I wading through them to make our escape out the back door.

Unlike what many people say about their dreams being bizarre enough that they can’t understand where they came from, I know the exact origins of everything in this dream.  First, I’ve probably eaten half a truck full of strawberries in my life. 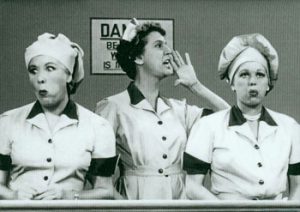 Even more, the week before the dream, a young friend and I were talking about TV comedies, and I told her about the I Love Lucy classic show:  Lucy and her friend Ethel had taken jobs wrapping chocolates on an assembly line, which went much faster than they could wrap – the same over-whelming scenario that we faced in the school kitchen (If you haven’t seen this show, look it up on the Internet, probably at Lucille Ball – chocolate factory).

While my many dreams about RHS had never been set in the school kitchen before, having it in my subconscious makes perfect sense, considering I found my way there every school day. 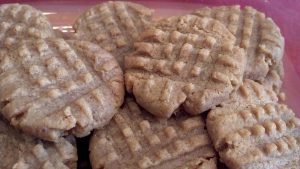 My first day there in 1967, I’d discovered that the best cookies on the planet came out of that kitchen in the flavors of chocolate chip, oatmeal and peanut butter.

The latter ones became an addiction for me, and there was no place in the building that had a circuitous enough route to keep me away from them, always during my earliest break in the morning. (I may have lost focus on “earthquake day” in January of ’86 – can’t remember for sure, but I doubt it). 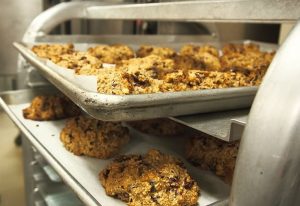 Since my retirement in ’95, I’ve been on a mission throughout our community for cookies equal to the RHS ones, and they just aren’t here. They were large, about 3 ½ – 4” in diameter and thick. Maybe it was the government-subsidized butter in them that made them special.

One time I asked Audrey Kuppler, the cook who made them every day, about the recipe. (See a note about Audrey below.) She said it would be difficult to cut the size down because she started with 50 lbs. of flour, 40 lbs. of butter, etc. (the end of any thought I had about making them myself).

All the cooks in the kitchen were such friendly, pleasant ladies: Audrey, Jean Pete, Lois Szuhay, Pam Williams, Jean Rigby, and a few part-timers. If they were not seated having their own lunch, I wandered around and talked to them, feeling sympathetic about how it would be to wake up each morning and face making maybe five or six hundred cookies in the massive mixers they used. Seems they were almost all fond of liver and onions, and I made a hasty retreat out of there when they were preparing that meal for themselves. None of it ever made it onto the kids’ plates – wonder why.

In thinking about these memories of the peanut butter cookies from Paradise, I also wondered about how many calories I’d consumed from them over the years and did some calculating. Do you remember the days when elementary teachers would assign arithmetic “story problems,” followed by major groans from the children? Numbers buried in words were just the pits of despair for anyone not good with math. Nonetheless, if a story problem were devised around my cookie addiction, it might be something like this: 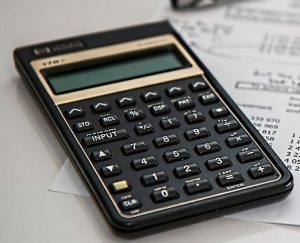 A teacher eats two cookies every school day for 28 years. There are 180 days in the school year. The cookies each have about 150 calories. In addition, the teacher also occasionally  takes cookies home for weekends and sometimes several for longer vacations, so over the years let’s say she consumes another 80 or so. How many cookie calories has she consumed during her teaching years?

After my calculating, the calorie count almost embarrassed me: the gluttony, disgusting addiction, the oinkiness of it all.  It would have been far more sensible to get up each day 15 minutes earlier to have a healthful breakfast at home. (BORING – too much cooking). To justify things to myself, I rationalized by thinking about the five trips I averaged each day on the stairways – enough to burn 300 calories within seven hours?  Probably not.

Just as the Online Log was about to be published, I was saddened to read about the death of Audrey Kuppler, referred to in this article. Her obituary in the News-Herald on March 27 referred to her spreading of cheer, kindness and love among all who knew her. That description certainly applies to her nearly 30 years of serving in the RHS cafeteria. It is only fitting that she spent so much time producing sugary treats – symbols of the inner sweetness of an unassuming, wonderful lady.

One Thought to “A Dump Truck Full Of Strawberries”