My family has a long history in Concord, with the earliest arrival by at least 1817. The members of my family went to whatever schools were available in Concord at the time. This is a story of some of the Concord schools through my great grandfather, Eugene Edgar Wade, his sons Martin and Wade, my father Jay Adams, plus my brother Kenneth Adams and me, Bonnie Adams Walker.

The Stone Schoolhouse still stands on Ravenna Road. The schoolhouse was built from local stone in 1840 for a cost of $200. It closed in 1923 with the opening of Concord Elementary School.

I helped turn the Stone Schoolhouse into a museum and I held educational programs there until I moved to South Carolina in 2014.

My great grandfather, Eugene Edgar Adams, may have attended this Stone Schoolhouse. His sons Martin (my grandfather) and Wade Adams did attend school there, as well as my  uncles Lysle and Raymond along with their sister Wadena.

To the right is my great grandfather, Eugene Edgar Adams, and his family. Eugene attended the “common” schools around Concord, when he was growing up. His family lived on Prouty Road in Concord during much of his childhood, so it is possible that he also attended the Concord Stone Schoolhouse.

This is my grandfather Martin’s report card from 1893 while attending the Old Stone Schoolhouse. 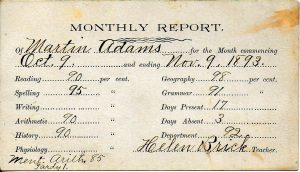 This is a picture of my great uncle Wade Adams as a boy.

He went to the Concord Old Stone Schoolhouse.

He grew up and became a soldier in the Spanish American War. He was part of Company M that had been formed in Painesville by Captain Burrows. He died of typhoid disease when he was stationed in Florida and is buried in Concord Cemetery on Route 608.

This is a picture of Judd’s Corner School. My grandmother, Ethel Brewster Adams, taught there before she was married to my grandfather Martin Adams. Ethel boarded at what is the Chaffee Farm on Route 608 in Concord. At the time, my grandfather was a school trustee and had hired my future grandmother for the schoolhouse.

The picture shows the scholars (as they were called) outside of Judd’s Corner Schoolhouse. They look like they were dressed for a school play.

The school was closed in about 1923, when Concord Elementary School opened on Ravenna Road. This was the Concord District 6 schoolhouse – there were others as well that closed at the same time.

This is a picture of my grandmother, Ethel Brewster Adams, at her graduation from Madison. She started teaching at Judd’s Corner School shortly after it was taken.

The Early Days of Concord Elementary

My father, Jay Adams, and my uncle Harold went to the new consolidated Concord School building located on Ravenna Road that opened in 1923. The building ultimately was converted into a maintenance building for Riverside Schools.

My father attended Concord from 1928 to 1933. He then attended Harvey High School, most likely since it had opened in 1923.

This is the Grade 4 picture with Mrs. Edith  Mordoff in 1932. My dad, Jay Adams, is in the first row, the first on the left end.

The boy at the left end of the second row, with the whitish air, is Adolph Sompii. He was my dad’s best friend. I forget which one was Joe Zelinsky.

Once, Joe and my dad were fooling around in Mrs. Mordoff’s class with large, black, butcher rubber bands. They were shooting them at each other and one of them ricocheted off my dad’s back when he ducked and landed beneath Abraham Lincoln’s eye in the picture in the back of the room. It looked like Lincoln was crying a big, black tear.

Years later, in 1961, when I was in the same 4th grade room with the same Mrs. Mordoff, I saw the picture in the cloak room, with a large hole under Lincoln’s eye. The rubber band had since rotted off, but the hole was there. I never said a word to the teacher.

This is a picture of my brother, Ken Adams, sitting on a desk outside in the yard of our house, probably in the early 1950s. This desk had been used in Concord Elementary School, most likely  since it had opened in 1923.

My grandfather, Martin Adams, was the janitor for Concord Elementary in the 1940s and 1950s. He was told to burn the desks as the school was replacing them. He brought one of them home and my mother refinished it.

My brother and I played on the desk and stored our pencils and paper in the drawer beneath the seat.

My son, Harry Walker Jr., also played on the desk. This same desk is in our spare bedroom in South Carolina today. Children still play on it. It is very heavy and sturdy.

In 1956, Mrs. Erma Mordoff had a combined first and second grade class. My brother, Kenneth Adams (in second grade then)  is seated in the first row of students in chairs, fifth from the left between the two girls.

In 1958, Kenneth was in the fourth grade with the other Mrs. Mordoff – Mrs. Edith Mordoff at Concord Elementary.

Concord School was a mix of classrooms, old and new, at the time I attended first grade in 1957. I am three years younger than my brother Kenneth. The first through fourth grades were held in the older part of the school.

We had blackboards and creaky, wooden floors. We had big windows that we could daydream from and wish we were outside.

There were cloakrooms, where we attempted to hang our winter coats. The wooden floor of the cloakroom had a jumble of rubber boots in big puddles of melted snow. There was a distinct scent of wet wool, soggy mittens, and banana peels in brown paper lunch bags.

At the beginning of each year, the smell of waxed floors and chalk greeted our noses. The hallways of the older section of the school were dark and somewhat scary. The newer section of the school was brighter and held the gym/lunchroom and the fifth and sixth grade classrooms,  To me, that newer part didn’t have as much character as the old, original part.

The Christmas play and second grade play costumes were made by my mom. She dyed old bed sheets to the appropriate color, and then made a pattern. The first grade Christmas tree was so successful that the next few classes asked to borrow it for their plays.

My dog Pixie is dressed in a baby dress and plastic blue hat. She kept a grudge because we had issues over the years. One time, when I dressed her like that, we had a delivery of coal to our house. When the driver came to the door to be paid for the coal, Pixie ran out to bark at him. He kept looking at her, like she was one ugly child, and went back to his truck, muttering to himself.

The second-grade play costume was for “The Shoemaker’s Wife.” I can’t remember too much about the performance, because I believe it was delayed for several days due to a snowstorm and cancellation of school. Mrs. Ives was our second-grade teacher at that time.

Outside, we had different sections of the playground. The first grade had a section with swings that had horses’ heads on them. We also had a huge metal slide and we would use a piece of waxed paper (left over from our home-packed lunches) to sit on and slide faster. The slide would get very hot and burn any exposed skin on our way down.

I remember that there were also swings that had heavy chains hooked on a long set of poles. I would try to swing so high so I could flip over the top. I never made it.

When the bell would ring signaling the end of recess, everyone would jump off the swings in motion, although we had been told to not do that. We also had teeter-totters, that of course we would jump off to the peril of the person on the other end.