I was enrolled in the 4th grade at Nursery School in 1950, now known as Hale Road School. At that time Mr. Kendle was principal, and I was always impressed by his portrait mounted outside the school office.

The infirmary was a small room on the second floor, equipped with a sink, a cot, a medicine cabinet, a chair and desk for the school nurse.

In addition to its original function, the gym served as the lunchroom, and sometimes it was used as an auditorium for special programs and assemblies.

The music room was in the basement. When the class sang between visits from the music teacher, I often accompanied on the piano.  One favorite was “Red River Valley.”

Our 4th grade room was on the second floor.  The seats were attached to the desks, which had tops that lifted up to store supplies.  Although inkwells were part of the desktops, we never used them.

The chalkboards were slate; chalk dust filtered out into the room.  What a privilege it was to clean the erasers at the end of the day. Pencil sharpeners were mounted near the blackboard, and we lined up to sharpen our pencils ~ time was allotted for this routine chore.

A daily ceremony was the raising of the outdoor American flag. To begin each day, our class recited “The Pledge of Allegiance.”  We stood respectfully with our right hands over our hearts.

Mrs. Reeves read aloud from chapter books on a daily basis. Her class was the first time I had heard about Mary Poppins and anxiously waited to hear what happened next, for each chapter ended at a suspenseful moment.

One of the traditions, and a highlight for the year, was the Maypole Dance.  I never could comprehend how the dancers interlaced their ribbons around the pole but it was fascinating to watch.  The May Queen, chosen from the 6th grade, and her attendants oversaw the entertainment provided by each of the grades.  When the weather co-operated, it was a fun day for all.

I would love to know the history of the large stone in front of the building.  I believe it was placed sometime after I graduated from the elementary building.  At that time the school housed grades kindergarten through six.

A large building stood across the school drive; I believe it was a garage.

Staff parking was on one portion of a side lot, and the playground took up the additional space.  Thinking back, I can picture a slide, a swing set, a seesaw, a merry-go-round, and a group of three bars you could walk through and around.  Perhaps some brave or maybe foolhardy kids climbed the bars, but I never witnessed the action. A few group games we played were “Red Rover,” “Simon Says,” “Freeze Tag,” and “Mother May I.”

While reaching into my memory for the above thoughts, my interest in the “ancient” history of the school was piqued, and I decided to research it by going to the Lake County History Center. When the school was slated for closure at in 2019, the school board held an open house in the fall as a final farewell, and many of the attendees were amazed to see people wearing T-shirts saying that the school had opened in the late 1800s, surely making it the oldest school building in the district.

A knowledgeable and patient volunteer researcher at the history center, Margaret Nago,   helped me find facts about Hale Road School that I never would have guessed. Like so many locales in the vicinity, the land it is on was originally a nursery begun by Mr. Jesse Storrs, who planted fruit and ornamental trees on the 80 acres he had bought.

Soon a Mr. J.J. Harrison joined him as a partner, and as more people moved into the area, a one-room wooden school house was built across the road from the Storrs-Harrison Nursery. The two men sold their land, and as the little school house was outgrown, it was torn down and a new brick one was built where part of the nursery had been. In 1909 another room was added and in 1915 a “modern” school was added in front of the old one.

A county atlas refers to the 1915 building as School 3, having been preceded by School 1 in 1874 and the School 2 in 1898. Four teachers taught about 150 students in School 3, which housed all 12 grades. The county and district superintendents also worked in the building.

One student, whose identity is unrecorded,  wrote memoirs about the school, which found their way to the history center. She referred to subjects taught there as “domestic science, drawing, music and writing. She said the county superintendent was the “author of the semi-annual examinations, which are much dreaded by all. But he’s alright in between times.” In another section she said, “The music teacher sees to it that we don’t play hookie.”

The student also stated that the school colors were red and white. She was writing in 1918 and referenced “war helpers,” girls in the school who were sewing clothes for the children of France during World War I, “under the direction of our teacher, who makes sure the hems are straight.”

For many years, everyone connected with the school referred to it as “The Nursery School,” and eventually the school board changed its name to Hale Road School because of the possible confusion about the word “nursery,” since the Storrs’ land ownership was long in the past.

The history center archives also contain a page from something similar to a yearbook, apparently printed in 1959, and it lists Hale Road School as having had 283 students in 1949 and 598 in 1959. The page is labeled “Decade of Progress” and includes a picture of  Robert Capella, instrumental music teacher, who later transferred to Riverside High School and was a long-time music teacher there.

Moving forward to the 1969-70 school year, I returned to Hale Road School as the speech-language pathologist.

Additions to the building, steps and front entrance are gone.  What was the playground became a parking lot for the staff.

One of the basement rooms was converted into the art room, and a former classroom was a library.  As enrollment climbed, HRS stretched to house additional children and staff.  Two classrooms were used by the special-needs students, and what had been the clinic was used by the reading/math intervention teacher.

Since a speech pathologist travels between different buildings, it was difficult for me to find a place to set up, and I occupied various rooms.  One of my rooms at Hale was on the second floor– a very tiny room later used for the latchkey director.  Eventually my old 6th grade classroom was available and became the office to our team of three speech teachers and later the reading/math intervention teacher.

Alfred Hitchcock must have had control over this room.  First we were plagued by flies.  They would drop from the ceiling and spin around on the floor, diverting the attention of my students.  One fly even had the audacity to land in my cup of cocoa! The cleaning woman apologized for the pileup of flies, for she no sooner cleaned the area than more dead flies appeared.

The second plague was humongous bees ~ all the size of a queen.  I managed to trap one in a jar and showed it to the custodian, who could not believe what he saw.  One never knew when a bee would dive-bomb, causing us to duck—an uncomfortable situation to say the least.  At last the exterminators came one weekend and the problem was solved.

Over the years, I witnessed conversions of rooms and space to accommodate additional programs.  I was retired when HRS underwent extensive cleaning out of asbestos.  Students and staff had to be temporarily relocated until the job was completed.

Did I really want to go solo to Hale Road School’s open house?  The distance was not prohibitive, for it is only a 5-minute or less drive from my home, which I call EMU’s Haven.  In the end I decided the tour was a once in a lifetime event and decided to go.

Hale Road School’s final open house for the closing of the building was at 6:00.  I left the house at 5:00, for I wanted to get a prime parking space that would be easy to get out of when I was ready.  The doors did not open until 6:00, so I stayed in the car doing word puzzles on my iPhone.  A few girls accessed a side door, but they must have had the code or key card to get in.  Suddenly there was a huge downpour, and I waited until it let up and went to the door which was locked.  I tried the second door, which was also locked, but the principal let me in.  A few others were also inside.  Access to the building was denied until the actual opening at 6:00.

The mother of one of the women waiting had gone to Hale Road in the 1800s.  Can you imagine?  I don’t remember where she lived, but it was quite a distance, for she had to cross railroad tracks, which were a hike in themselves.

First I got a nametag and then proceeded to the gym, where they offered water bottles and cookies.  The Riverside Alumni group was there with RHS T- shirts.  Sue Chaffee, art teacher, had paintings for sale.  On display were yearbooks and pictures from previous years, sorted by decades.  I had a 30-year history with the building:  1950-53 as a student in grades 4, 5, 6 and as a speech therapist from 1969-1987.  Would you believe our 1950s years were not in the display?

I chose to climb the  l -o-o-ong flight of stairs to the upper level and work my way through the rooms.  At the top was where the 4th grade had been.

As I looked around the old 6th grade room (which later housed the three speech therapists and the reading specialist), many memories emerged.

A woman entered the room and said she had been in the 6th grade there with Mr. Brewster as her teacher.  We were fellow classmates!  As we reminisced, another woman came into the room and told me I had given her piano lessons ~ I was probably in the 11th grade at that time and had my driver’s license.  That goes back a few years to say the least.

The building was packed with those who wanted to wish it a final farewell.  As I walked through the teeming halls, I encountered a few former speech students as well as some teachers I worked with.  I also encountered acquaintances that had a history with the school.

With mixed feelings, I exited Hale Road School for the last time and said a fond farewell to a building that had served its community for many years. 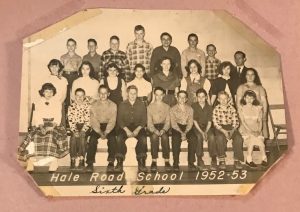