The Riverside High School Class of 1968 celebrated their 50th Reunion August 10-12, 2018. Most especially, the 50th seemed like a significant achievement that had to be celebrated. The motivation is there in the Alma Mater, with its promises about hearts lingering in those halls of ivy. After all, life always has ups and downs, some in high school and a lot thereafter. Many journeyed far away and some not so far after that glorious day of graduation. Can a reunion bridge all those life experiences?

It was never spoken, but surely some had a lot of trepidation about attending. Some worried that they had gained too much weight or lost too much hair or had medical problems that might slow them down a bit. Perhaps they worried that the old cliques were still in existence, or their working lives might be compared to others that were more successful. But if they worried, they came anyway.

Others, of course, were immediately enthusiastic about the reunion, about seeing everyone again. Time had made no difference; they wanted to reconnect with old friends, remember good (and bad) times again, and live in the moment of joy of having made it this far. And they showed up.

It turned out that no one cared about the changes 50 years made, and there were changes. Everyone celebrated the range of careers classmates had chosen — teaching predominated, but also military service, ministry, health care, business ownership, government work, and more. No one cared about medical issues (they all had them), or physique (everyone was affected by age), or what color their hair was (or lack thereof). Eighty-seven classmates attended at least one of the events. 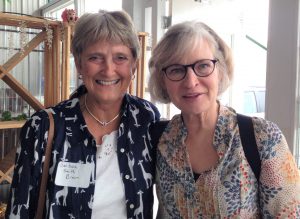 It  started on Friday night at the Deer’s Leap Winery in Geneva. As people trickled in, there were hugs and smiles and photographs and stories. At that moment, it was clear the success of the entire weekend would be remarkable. People talked and shared and ate and drank (some alcohol, some not), and stayed long after the band started and drowned out the conversations.

Saturday started  with a tour of the Riverside High School building (captured well in the photograph above). Teachers were remembered (Mr. Shaner and more). Classrooms often looked the same (the choir room, the gym, the auditorium – even the hallways and stairs). What was different? The cafeteria now with a coffee bar, and the library with computers! There were remodeled science labs and Mr. Shaner’s classroom is no more! 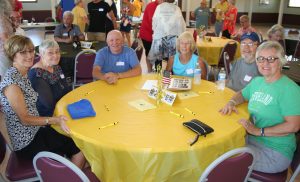 The RHS Alumni Picnic in the afternoon at Township Park, including a great view of the lake, continued the reminiscences. There were conversations between classmates,  mingling with other classes, a fundraiser for a military memorial at the high school, a recognition of military service, music, and great sunshine with a beautiful breeze off the lake. 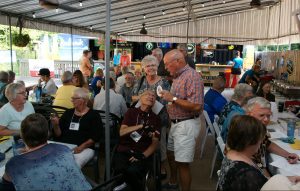 The Saturday night dinner at Redhawk Grille had the largest attendance and was the noisiest of events with lots of activities. There were a 50/50 raffle and a quiz based on classmates and teachers in 1968 (and yearbooks scattered about for reference). Embossed napkins, embossed pens,  a cake decorated by Gartman Bakery in honor of the 1968 class, name badges with yearbook pictures and more were featured. No one stayed seated for long as people and conversations moved from group to group. We honored the classmates who have passed (39 that we knew of then). We honored those who could not attend the reunion. We honored our teachers. We sang the Fight Song and the Alma Mater. 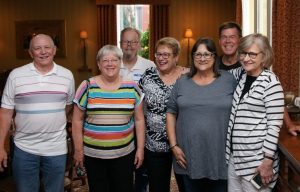 Sunday morning concluded the reunion with an informal breakfast brunch at Quail Hollow Resort. Once again, the mingling and table swapping continued in a very relaxed atmosphere.

Even more, the planning committee purchased enough mementos to send to every classmate (for whom we had addresses) who could not attend. Thank you notes received show this effort was much appreciated. The class members will continue to communicate through their web page.

The results of months of planning and hopes? Smiles and hugs dominated everything. No one escaped without a lot of both, regardless of any changes in looks or career or clique or eventual station in life. None of life’s ups and downs mattered. We learned that life at Riverside High was a strong foundation for the future, that we all moved ahead, that we each held our own truth, and that, as the Alma Mater predicted, a part of our hearts would always linger there. The 50th Reunion was the sweet afterglow.

If you have some thoughts and photos about your reunion and want to submit it for our next Online Log, contact us!