Publisher’s Note: This is another in our series of former students remembering special teachers from their time in the Riverside School District.

One Great Teacher Does Make A Difference

Dr. Mary Allen Porter once gave me a card that I kept with this quote:
There are those whose lives affect all others around them, quietly
touching one heart who in turn touches another, reaching out to
ends further than they would ever know.
As her student, colleague and friend I felt this,
and it is the reason we had it painted on the wall next to a service project she inspired.

I took studio art classes in grades 7-9, and I didn’t feel that I was good enough to move on to Art 2 so I took art appreciation. In that class we did small projects in the style of other artists. On my first project Doc asked why I wasn’t in art. (After Ms. Porter received her doctorate her students often referred to her as Doc rather than Dr. Porter.) I told her why, and she insisted that it was nonsense, and she put me in Art 3, where she thought I belonged. In Art 3 and 4 I consistently found myself challenged by the art projects and enjoying what I was doing. She always made us feel like we could do it and would push us along as needed in addition to giving us freedom of choice in projects. 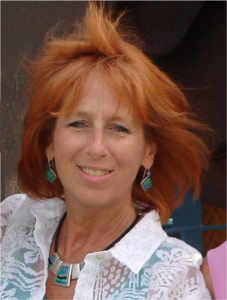 As a member of her class Doc also inspired me to run for Student Council and to apply for National Honor Society. At that point I did not know she was on the committee for NHS and that she would protest if students like me did not get into NHS, often threatening to quit the committee. She always had our backs. She believed in her students so much because she knew they needed a cheerleader. She was very trusting of us and always gave us the freedom we needed to succeed and feel independent.

Art Concepts class was amazing, so much so that I took extra art history classes in college. Art Concepts was art history but more like a tabloid than a textbook. She gave us the dirt on artists. She made Michelangelo relatable as she stood on the table modeling contrapposto. She allowed us to see nudity in artwork as a thing of beauty instead of a thing to giggle about. She made us question our beliefs and allowed us to respectfully share them. We had our first real experience with a dark classroom, where you take notes until your hand falls off and you would not think about taking a nap because you would miss something amazing and most likely hilarious.

See a silent film Porter directed and edited in 1977 here.

Doc created a museum experience that made us really look at artwork from a different perspective, and she instilled the love of museums in us. She gave us a look at the world to make us think about others and shined a mirror on us to see how we respond to the world around us. She worked so hard to instill a love for travel and respect for the world’s cultures.

I would never have traveled across Europe if I had not taken Art Concepts. I would never have had the confidence to stand in the Sistine Chapel, look at the ceiling and tell my friend about Michelangelo and all the crazy stuff he pulled with the Pope and then before exiting turn around to notice that I had a group of people following us because they thought I was a tour guide. 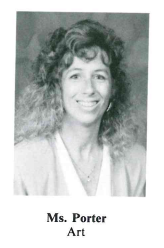 As student council officers Doc treated us as if we were equals. She gave us responsibilities and taught us how to be leaders. We spent hours and hours in her room before school, after school and even weekends. At the time I felt I lived there and did not even think about the fact that she was also there, giving up her time to make our high school experience amazing. She developed a program that made council members want to be involved in volunteer experiences as well as the Pyramid of Remembrance. The Pyramid of Remembrance was the brainchild of her Art Concepts class the year before I had her. With the old members of the committee graduating, she enlisted current students and council members to help with the project. We had our first experience with government bureaucracy, and I am thankful for the opportunity to remember those who were injured or gave their lives serving non-declared war situations. The project took on different forms as time went on, and she did not see the memorial come to fruition until ten years later. In my opinion, in addition to her earning a doctorate, the Pyramid of Remembrance was one of her greatest accomplishments.

After I graduated, I went to college and double- majored in art and psychology, even though she thought I should be a teacher. Little did I know that three years later I would be graduating from college and returning to school to earn a teaching certificate. This was at the same time that she was first diagnosed with cancer. I was called in to sub for her after being gone only three years. It was the weirdest experience. Everything I loved about her classroom was now my worst fear. I had no control of her students! They loved her and respected her and her boundaries, but we did not have that type of relationship, and I had no idea what any of her students were doing.

Doc’s classroom was what I would call organized chaos. She did this because it was what was best for her students even if it meant her running around the classroom like crazy all day long. Everyone was working on something different because she gave them options just as she had in my class. By giving the students choices on their projects, they had ownership over the work and they felt more attached to their work. Unfortunately for her that meant five times as many demonstrations and a lot more teaching than anyone would expect. It meant that she conferenced with every single student and it meant that she could have more than one grade level in one class. She also allowed students to sign up for class when it worked with their other classes. This created double the work load for her, but it was better for her students so she did it without batting an eye. I do not think I ever saw her sitting at her desk. She was always helping, inspiring, and pushing others to be their best.

One year later she called me to tell me the school was adding an art teacher position and that I should apply. Again she went to bat for me and put her reputation on the line. I am not sure what the conversation was like, but I was the one who was offered the job and here I am 15 years later without her. I thought for sure I would have the honor of working with her for many years. I had her retirement speech written in my head, and that speech ended up being her memorial speech. 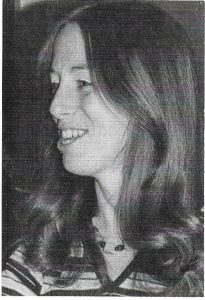 In the year she became ill, we did our best to again fill her shoes. At that point Doc was in charge of NHS, an organization that in a few short years went from something that was just a label to a full-fledged volunteer community- centered organization. She was also in charge of the school yearbook. The yearbook staff with the guidance of teacher Jayne Lauer took over the yearbook and did an amazing job. I stepped in for NHS and spent a semester flipping back and forth from teaching Doc’s classes and teaching my classes so the students were still getting art instruction until she returned.

I felt an immense drive to do whatever I could to pay her back for all she had done for me. I would not be the teacher, friend, colleague, or wife that I am without the guidance she gave me. Not a day goes by that I do not use something she taught me. She spent her conference period almost every day helping me with the Art Concepts content my first year of teaching. She taught me how to deal with difficult people and how to constantly remember what is important. I always felt that, even though I was her colleague, she would in some way always treat me as a student and help in some way because being a teacher is who she was deep within her soul. She constantly reminded me, “Jessica, on the scale of what is important, how important is it?” Then she would show a scale with her hands, list the important things…your health, having passion for what you do, your family, and then things that are not important, like being observed as a teacher or dealing with a student who doesn’t like you. Even as she was undergoing treatments and felt sick as hell, she still kept a positive attitude. In late 2005 we found out that she was not going to get better and health care workers would be doing things to make her more comfortable.

It took a while for me to understand that her place in my life was to get me here, and no matter how mad I still get because she is not here anymore, I remember that it is my job to be at least one student’s “Doc “. It is mind- boggling how many people’s lives she touched and in return how many they touch. The passion she exuded on a regular basis was contagious and we are all better for it.

Editor’s Note: Mary Porter began her teaching career in the Riverside District upon her graduation from college in the 1972. Mary passed away in 2007 after a second bout with cancer. Her first round of cancer began in 2002. Jessica Presutti Biller graduated from Riverside in 1998. She began teaching art in the district in 2003. The Pyramid of Remembrance was dedicated at Arlington National Cemetery in 2004.