Once a BEAVER, always a BEAVER. What happens when beavers build their homes? They band together and build the strongest, most beautiful home on the river. 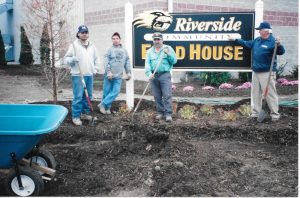 The year 1984 proved that once an alumni Beaver sets his mind on building something, he and all his alumni Beavers band together to get the job done. That determination is the foundation for how a group of alumni parents, business owners, and teachers formed the Riverside Community Athletic Foundation (RCAF). Their goal was to spark the creation of a private partnership with area residents so that the school’s athletic facilities could be brought up to par. The group wanted a focused facility that would solidify the school’s identity and would include the three townships of Painesville, LeRoy, Concord and the town of Grand River.

RCAF obtained not-for-profit 501(C)3 status and began raising money. Two fund raisers were held annually in the fall: a golf outing and a Chinese Auction. Success in these events allowed the group to steadily increase its level of assistance. An architect was then commissioned to develop a master plan that addressed all deficiencies in the school’s athletic facilities.

In 1997 RCAF solicited help from the community to complete a major project: renovation of the high school football field. Thanks to the generous gifts of more than 30 area corporations and 150 volunteers, the job was completed that spring with an estimated value of $175,000.

The Community Field House was RCAF’s next project, its goal being creation of a new home for student athletes as well as for local residents who want to keep in shape. Investment was almost $2 million by the time the 22,000- square- foot building was completed. It has a college-sized basketball floor, wrestling facilities to accommodate six matches at once, and indoor and outdoor tracks.  Key to the project’s success was the enormous volume of materials contributed and the labor to make the facility complete. Many benefactors gave of their time and money; listed below are several of the major ones:

*The Sidley family – contributions valued at about $150,000, which include a family foundation gift of $50,000 worth of exterior blocks donated by Bob Sidley and all the concrete for footers, floors and sidewalks provided by the Sidleys at cost.

*Steve Babb of Harbor Construction – all steel work, including structural steel and roof.

*Kevin Edgell – plumbing including 50 toilets, 50 sinks, drinking fountains and much heating and ductwork.

*Amy Gallo of Goulder Electric and Jim Magnus of Magnus Electric – large volume of materials plus hundreds of hours of labor donated by the International Brotherhood of Electrical Workers.

*Bill Guyer – president of the RCAF, “Head Beaver” and organizer of the endeavor.

*A man simply known as “Russ” – gave about 100 hours of his time (had no children in the school system).

Many cheerleaders, students and faculty members also pitched in as needed, and the wrestling and basketball teams contributed a large amount of labor. Work crews refurbished the Merrick Hutchinson School in Grand River so that it was air conditioned and could be used for bingo  that brought in revenue for unpaid bills. It was a $40,000 effort that included improving the parking lot and purchasing tables and chairs. 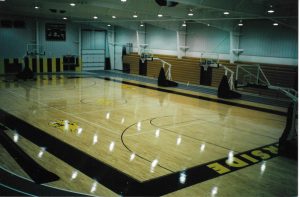 In summary, the above is far from a complete list. The Log staff apologizes for any omissions but wants to give a picture of the level of involvement that made the project a reality. Many of these same men and women are still very much involved at Riverside doing what Beavers do best: working hard to build a strong foundation for the youth of the district. These alumni are not just old people “hanging around.” They are proud contributors leading by example.

NOTE: The field house’s track is open to the public for walking from Monday – Friday, 7 a.m. to 11 a.m., except for holidays. The new outside track may be used during the same hours. (The weight equipment has been moved to the John R. Williams’ facility and IS NOT open for public use due to the location and the hours when students are in attendance).

One Thought to “What Do Alumni Beavers Do Best?”