The Halls of Ivy

Recently a friend and I had an opportunity to take a sentimental journey through the halls of Riverside High School. We wandered alone – and even though the building was relatively empty, felt and heard noises and voices from years gone by.

On the wall in one of the hallways we saw this verse:
“There are those whose lives affect all others
around them, quietly touching one heart
Who in turn touches another, reaching out to ends
further than they would ever know.”

This began our recall of learning each day not only from books but from our contact with other students and teachers.

We talked especially of teachers we had during high school, searching our memories for the teacher that had the biggest influence on us. 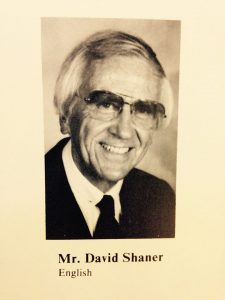 For me, there is one particular teacher whose teaching style and methods, although unconventional at times, have followed me through the years.

At the start of a new year, when checking the assignment sheet, I actually prayed not to be assigned to THAT teacher. You know, the one where stories were handed down from year to year that made your blood run cold. This person who expected certain things from you that you knew you could not deliver or accomplish – this teacher who could cut you down to size with just a look over the top of his glasses.

As luck would have it, this was the teacher I would have for a full year!

He had the largest classroom in the building – up the middle stairs, turn left, then left again – and you were in that place.

You learned the first day to enter his classroom without talking. You were to go immediately to your seat with your notebook and a good supply of notebook paper – at least two PENS – pencil with an eraser. You had to remember to sit straight in your seat – feet flat on the floor, eyes forward, three deep breaths and to be ready for the gaze and opening greeting: “Good day, ladies and gentlemen, let us begin.”

He expected his students to be fully prepared for class. This was a teacher who, with no notice or pattern, would call on his students and expect them to be able to answer any question presented to them on the current subject.

This was a teacher who would get your attention through animation – if you did not answer a question to his satisfaction, he would get out of his seat, come face to face with you and ask if you were quite sure that was your best answer. Or he would lower his voice two octaves while saying “No, no, no,” all the time pretending to pull his hair out.

He never, ever called students by their first names but always by their last, which made an impression long remembered through the years: “Yes, Mr. Smith – Miss Brown – Miss Jones – Mr. Johnson.”

His influence was felt not only in the classroom but in speech and drama classes and class plays, where he allowed introverted, inexperienced students to find new avenues for expressing themselves.

Through his assigned teaching duties in all areas and his unconventional form of teaching, he brought out abilities and personalities in students they had no idea they possessed, and these strengths followed them throughout life. He learned early each year the strengths and weaknesses of each student and helped him or her realize talents and abilities. At the end of each year one realized he not only taught “subjects” but so many of life’s lessons – discipline, detail, pride in accomplishment and respect.

This was David W. Shaner, who provoked fear in the hearts of students at the beginning of each school year and who was remembered with thankfulness, respect and affection at the end of each year. Well, most of the time – but if your experience was not as positive, you still talked about him through the years!

Each day he gave his best to his students, and on the last day of the year most students came to realize they had also been able to offer their best. 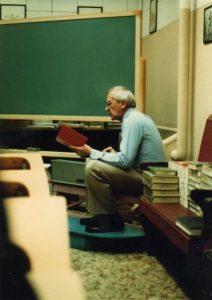 Years after graduating I wanted to let Mr. Shaner know what a positive influence he had on my life. He helped a very shy high school girl who lacked confidence feel there were contributions everyone could make, no matter how large or how small.

So I wrote to Mr. Shaner, wanting to let him know what an important part he played in my life. Before sending the letter it was edited numerous times to be sure punctuation was correct – that there were no run-on sentences – that inflection was properly stated. I marked the draft over and over – made corrections with red pencil – scratched out whole sentences and noted revisions of paragraphs and spelling. The final copy was cleaned to perfection and mailed.

It wasn’t until a few weeks later when I was clearing out paperwork thatI came across the final copy – having mailed this master teacher – this perfectionist – the draft of my letter!

Months went by without any acknowledgment of that letter – – did he receive it? -Did he grade it? Did it get misdirected and never delivered (hopefully so)? Did he pull out his hair and grab his chest in shear confusion as to how he failed this student so miserably?

Close to Christmas that year I received a beautiful card from Mr. Shaner, thanking me for writing and expressing how much it meant to him to receive kind remarks from a student. (There was no mention of the draft he had received.)

********
Have you encountered special teachers in your life – – in grade school, middle school, junior or senior high school? If so, and if you can, take time to thank them and let them know they have been a positive influence in your life.

4 Thoughts to “Walk Down The Halls of Ivy”