Senior pranks have been a rite of passage in many high schools and have ranged from the annoying and mundane (setting off stink bombs and fire alarms) to the slightly more imaginative (turning dogs or wild animals loose in schools’ hallways or putting “For Sale” real estate signs in their front yards). One story has it that some RHS seniors many years ago cemented a toilet to the building’s front porch. (Publisher’s Note: It’s True: Class of 1980) 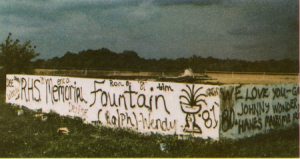 However, one group of seniors in the early ‘80s outdid all others and gave everyone coming into the school something to laugh about. The school’s sewage treatment plant for many years was located west of the building in a fenced- in yard. It had a rotating aerator and produced odiferous fumes that plagued classrooms to the west,especially during warm months when the wind was from that direction. But one day during Senior Week, people coming in the west driveway were greeted by a large teddy bear sitting in the middle of the aerator with a huge sign on the wall surrounding it: RHS MEMORIAL FOUNTAIN.